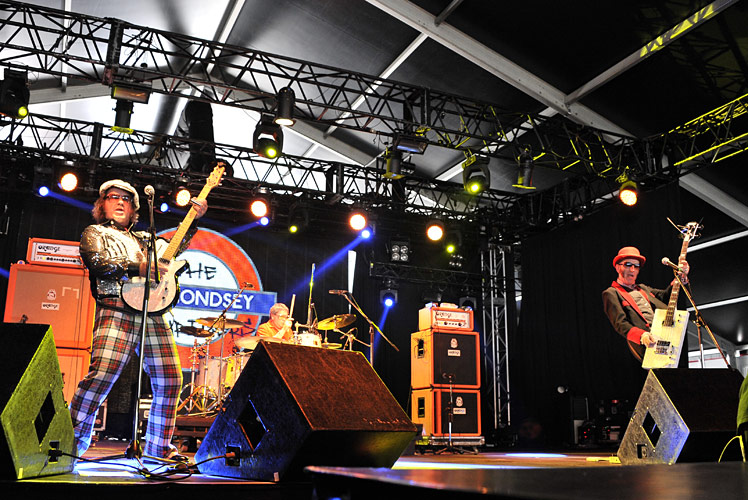 It would be wrong to call Bermondsey Joyriders a tribute band. Founding members Gary Lammin (vocals / guitar) and Martin Stacey (bass) are the real deal, living every moment of the rock and roll life, staying true to raw guitar riffs with swagger even while popular music took a detour into the synth-heavy 1980’s.

The band, have rolled all this experience into their music, wth songs such as “Johnny Thunders Was a Human Being” seemingly being a letter a long-lost friend and rather than an homage to the legendary leader of the New York Dolls.

Lammin has staid true all these years, even with lesser known groups and recordings such as the Little Roosters, who recorded in of all places France. Joe Strummer produced the album, and as the myth goes, he was compensated with dental work.

One song from this era is “People Break Down” is pure Rolling Stones at its rawest, nastiest, just a kick of a shoe away from Mick & Keith. And later in today’s set at the Red Marquee they did a send up to Brian Jones, in the song. Brian Jones (The Real True Leader of the Rolling Stones)

Many may known Lammin would front Cock Sparrer a seminal Oi! Band. With tunes like Take em’ all, and “England Belongs to Me” not the most politically correct but fun romps nonetheless.

The three members of Bermondsey Joyriders would end their set this morning with a Jimi Hendrix riff, and the promise that ” If I stand up next to a mountain, I will chop it down with the edge of my hand.” A fitting statement considering the beautiful setting of Fuji Rock.