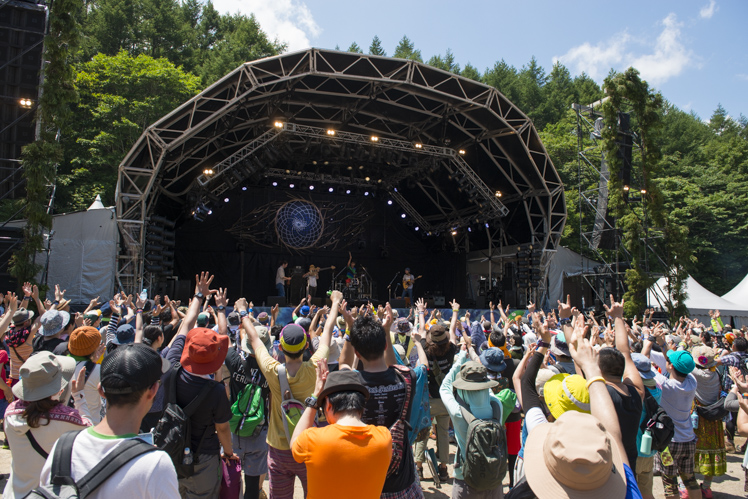 Kyoto’s Nabowa occupy a musical corner filled with contradictions. Billed as an ‘organic jam band,’ they are almost a precision machine with occasionally processed sounds. Their structures approach something akin to post-rock, but their sound is indelibly identified by the violin work of Hiraku Yamamoto; for better or for worse, that often make Nabowa sound as if they’re jamming on instrumental sections of Dave Matthews albums. They’re too tight for a jam band, and too loose for a post-rock band.

None of this mattered to the early-bird crowd at the Field of Heaven, though, for several reasons. First, this is FujiRock – the only ones over-intellectualizing anything are probably us blogheads. Second, Nabowa’s jammy flavour is served well by Yamamoto, as his violin is often the main melodic thrust. His style is refined, but not staid; he’s the wildest card in a fairly controlled group of musicians, just by the nature of his instrument. One minute he’s mellow; the next, his bow is threatening to pull the entire song sideways into a bluegrass jam. It never happens, but the tension is one of the most interesting elements of the music.

Third (since I started this stupid ordinal number thing) is that this crowd wanted to dance – despite the mountain sun baking the last molecules of moisture out of the earth below them. Nabowa’s rhythm section keeps the music driving steadily forward, as Yamamoto and guitarist Kanade Kageyama lay their melodies and solos on top. Here, too, the band’s contradictions came into play; the rhythms could bend towards funk, but the melodies held firm to another course.

Though they didn’t have too much visual presence, it was clear that their focus was on the music, and the crowd’s focus was on moving their feet to the same thing. Not a bad way to start the day – and the festival in general.