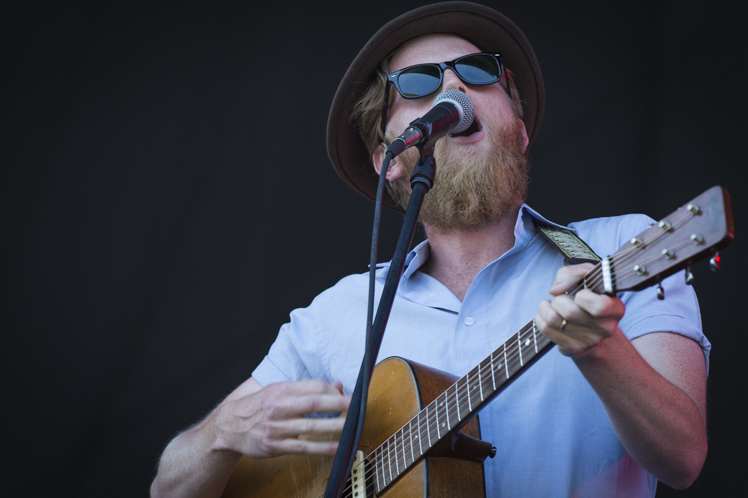 The Lumineers played their first of two FRF ’14 sets on Friday afternoon at the Green Stage. The American folk rock quintet brought their A-game from the start, playing popular singles “Submarines” and “Ho Hey” within the first four songs of their performance.

Having a bit of fun, vocalist Wesley Schultz took off his fedora and hung it on the head of his guitar while strumming the slowed-down start of “Classy Girls.” He wisely popped it back on his noggin just before the track became a much more rollicking affair. Next, Schultz and company offered up their take on Bob Dylan’s classic “Subterranean Homesick Blues.”

Schultz told the crowd that the band were going to play a new song before he and Neyla Pekarek sang a stripped-down duet together. Things were going well up until that point. And then they got a whole lot better. Schultz said “We’d like to come out and play a little closer to you,” as he and Jeremiah Fraites hopped over the security barricade and made their way into the audience. Many people rushed to surround the two as they began to play “Darlene.” And with Schultz and Fraites capturing the lion’s share of the crowd’s attention, few people noticed Stelth Ulvang making his way through the audience and climbing the stairs of the structure that holds the video screen and the speakers that are set up in the middle of the field, right behind the Green Stage’s sound booth. A roar erupted as everyone suddenly realized that Ulvang was standing 40 feet above the crowd playing accordion! He took a moment to wave to everyone below as the band kicked into “Elouise.”

With Schultz and Fraites surrounded by fans and Ulvang walking around high above, the energy level at the Green Stage skyrocketed. And luckily, it stayed high as all three members returned to the stage for Lumineers last few numbers. In my 10 years at Fuji Rock, I’ve never seen anyone play on top of the speaker stacks behind the Green Stage soundboard. That move alone is going to have The Lumineers in the running for one of the best performances of the fest!