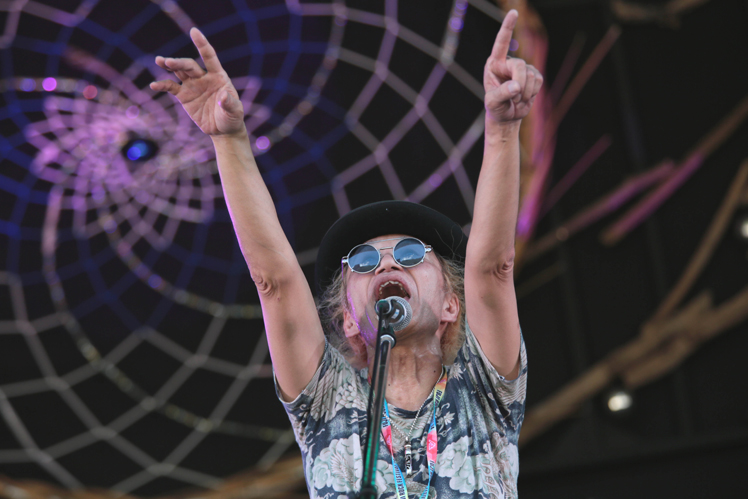 There’s a certain power and magic approaching live music from an unknown point of view, going in fresh with no expectations and allowing the musicians to win you over or not. Of course zero expectations are almost impossible unless you don’t even know the artist’s name or venue. In this case I did know both, I knew this band was called Sooo baad revue and they were playing at the field of heaven stage, which is normally reserved for jam bands, funk, soul or hippie-type bands, attracting a bit of an older crowd.

So, will my review similarly, be sooo bad? Fortunately not. What I was treated to was a bluesy Japanese rock and roll band. They consisted of two guitars, a bass, drums, keys and a vocalist. These were all older guys, probably in their sixties. I later found out, these were six fairly famous and talented musicians from the Kansai region of Japan. They only have a single album together released a couple of years ago. Their technical skill certain was evident as they played complex blues solos and riffs. They looked very comfortable together and their exchange back and forth seemed very natural.

Something that separated this blues band from a number of similar Japanese bands was the lead singer. Instead of simply trying to copy American and British rock and blues bands and sing English lyrics, the vocals made this band unique. The lead singer, who I later found out was a trained comedian, actor, dancer, and pantomime, unitized these skills on stage. He would very carefully and slowly tell humorous stories or little anecdotes at times, all the while, the band was jamming out in the back. Later, the front man could be seen miming or acting out little skits. In addition to the skilled technical abilities of the instrumentalists there was a different kind of show going on at the same time. This is something that really stood out in the live performance and surely can’t translate to recorded material.

This type of performance didn’t draw a huge crowd, but was more than appreciated by the usual laid-back hippie types who hang out at the field of heaven, myself included. It’s fun and unexpected performances like that of Sooo baad revue that make live music exciting.