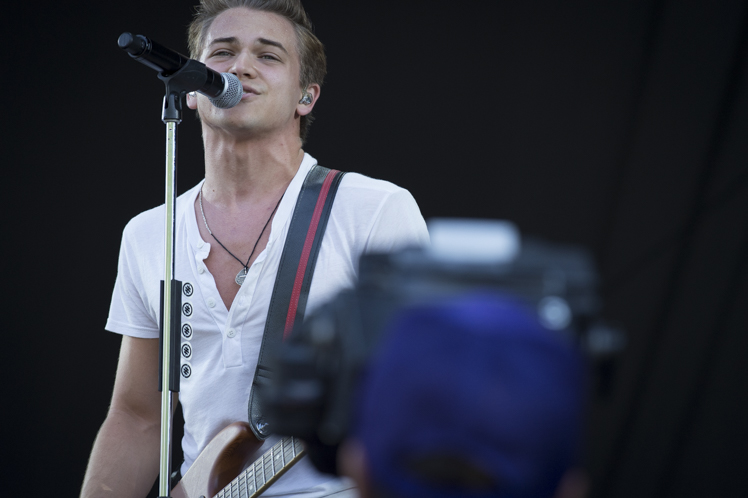 The early-afternoon slots can be a tricky proposition for performers. Fuji Rock goers are either off scarfing down lunch, or they’ve just eaten and may not be 100 percent to get crazy on a full stomach. United States country singer Hunter Hayes, a Louisiana-born 22 year old who is the youngest performer to ever top the U.S. Billboard Hot Country Songs chart, didn’t hold anything back for his set on the Green Stage. He darted out from stage right strumming away on an acoustic guitar, and was soon hollering and jumping around his five-piece band. This was all on his opener, the twangy country-pop bouncer “Storyline.”

It was a kicked-up way to start his first-ever performance at Fuji Rock, but Hayes balanced it out with less energetic cuts so that the crowd…and, based on how much he zipped around the stage, himself…didn’t burn out. The easy-breezy sway of “Somebody’s Heartbreak” served as a good breather, while Hayes teased Jason Mraz’s “I’m Yours” before revealing a similarly sunny-day strummer, anchored by the presence of a mandolin.

Yet the best moments of his Green Stage appearance were when he just barreled forward with his electric guitar. Almost every song featured a guitar solo, while one almost-eight-minute number veered into jam-band territory, Hayes dueling with his bandmates and running to both sides of the stage to show off his finger work. For his Fuji debut, Hayes served up a varied post-lunch session that worked well in its time slot.