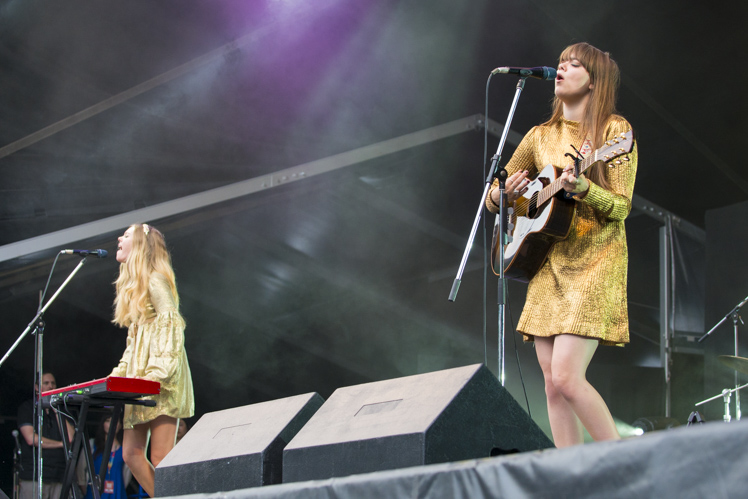 Swedish sister-act, Johanna and Klara Söderberg, couldn’t have asked for a more perfect setting to their “Stay Gold” tour. With the sun setting in the background and both sisters wearing shimmering gold dresses cropped tightly above the knee, the stage was set for an unforgettable performance.

They began with the title track, a song undoubtedly aided by the production of Mike Mogis of Saddlecreek Records, and his touches are everywhere, from background steel pedal guitar to the crisp mid-tempo drumming. But the focus of this show was undoubtedly the sister’s who proudly stood center stage and sang with full gusto and harmony. Many were surprised to learn about Johanna’s fluent Japanese. She interspersed each song with thoughtful and well pronounced Japanese. She must have done her homework for this show, and undoubtedly she will have many more chances to practice Japanese given the success of today’s set.

The sister’s hit full stride with “King of the World” and other tracks such as “My Silver Lining”. Known for their inventive covers, the band surprised many by dishing out a Bob Dylan song “One More Cup of Coffee (Valley Below)” And then it was almost time to go, though no one wanted to leave as they ripped into a tear jerking version of “Emmylou” a much talked about tribute to country greats and the rocky relationships of Emmylou Harris and Gram Parsons and Johnny and Jude Cash.