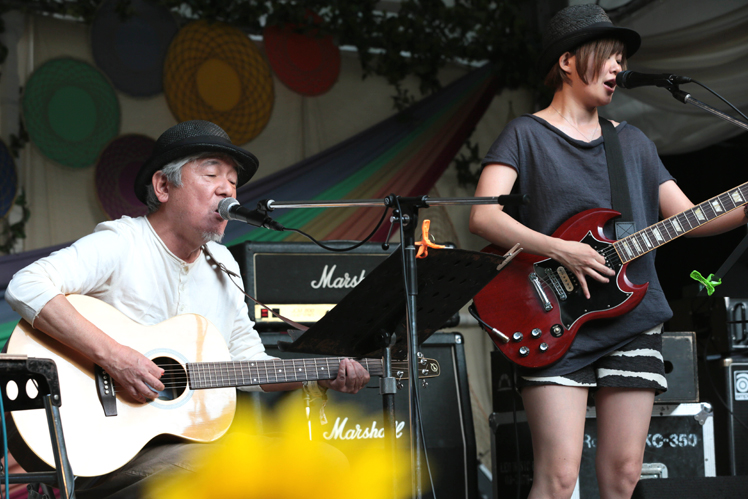 Controversial Spark is less controversial, more complicated. Often bands will have members roughly of the same age—or at least of the same generation. Not so for these guys, who seem to be above ageism. Frontman and vocalist Keiichi Suzuki (formerly of Moon Riders) is in his 60s, drummer Hiroshi Yabe (not present at the show) is in his 50s, acoustic guitarist Kenji Kondo just hit his 40s, bassist Naomi Iwazaki is in her 30s, and the younger of the lot, guitarist Konore is in her 20s.

The band is less than a year old, but they’re already gaining a fair amount of attention with their light and catchy folk music-style melodies contrasted with heavy rock’n’roll guitar riffs. All members are involved in the songwriting of most songs, and their respective influences and talents shine through because of it. Furthermore, with three vocalists, the tone and pitch of each song is completely different, ranging from Konore’s sweet, slightly-nasal song, to Iwazaki’s more soft and mellow vocals to Keiichi Suzuki’s deep and (comparatively) rumbling baritone. It was most noticeable during “Hai hai soko no no ni Saku Hana”, as Suzuki, Konore and Iwazaki’s voice were less in unison, more heard alongside each other as each voice was distinct and easy to pick out from the others.

The show was a peaceful and enjoyable hour—perfect for the Avalon stage, where people like to lie down and listen rather than actively partake in shows. That is, until their final song, guested by a keyboardist and violinist, ended on a slightly awkward note with an impromptu spacey jam session. While Controversial Spark may not be everyone’s cup of tea, they certainly know how to keep you on your toes!