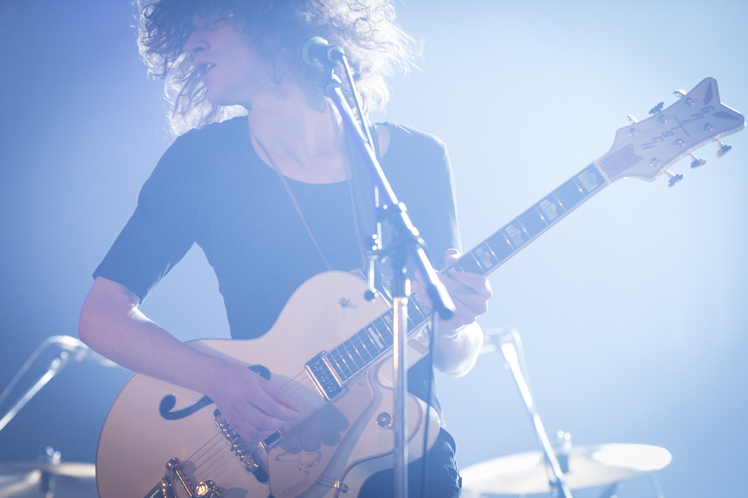 Temples, playing at 4:30pm, may have been the first packed venue of the festival. It was hard to push through the crowds and into the extended hangar that defines the Red Marquee stage. And then this neo-psychedelic pop, which was strangely good but also a disconcerting throwback. Are the 70s really resurfacing so violently in music? Is this a band in the vein of The Blue Oyster Cult, the Zombies or maybe even Donovan? And now, in 2014? Why? And how?

Lead vocalist James Edward Bageshaw, of the pretentious middle name, possesses the same kind of charismatic power as the singers of those top-shelf bands. His voice is at once laconic and seductive, though his pitch is at least half an octave higher. Like Blue Oyster Cult and MGMT had a baby, and they called it Temples.

Bageshaw’s vocal parts to soar above the stoner rock of the band, heavy on wah-wah pedals and underpinned by slow, steady heartbeat rhythms. He sings about hippy-dippy tautological bullshit: “when the time comes, move with the seasons”, “keep in the dark to stay out of the light,” and so on. But at least the choruses are easy to sing. And the songs are good.

Before I saw this show I had no idea that Noel Gallagher had called Temples, a band formed in 2012, the best new band in Britain. I had as a matter of fact never heard of Temples at all. A friend, stepping into the Red Marquee for a few songs, said they sounded like Kula Shaker. They are young and clear in their vision. But I’m still not sure which decade their vision should date to. I actually kinda wish I was on mushrooms, and they were the start of my Freaky Friday: Temples, Rovo and System 7, The Orb, Yamataka Eye. But if I were on mushrooms, this would be a completely different review.