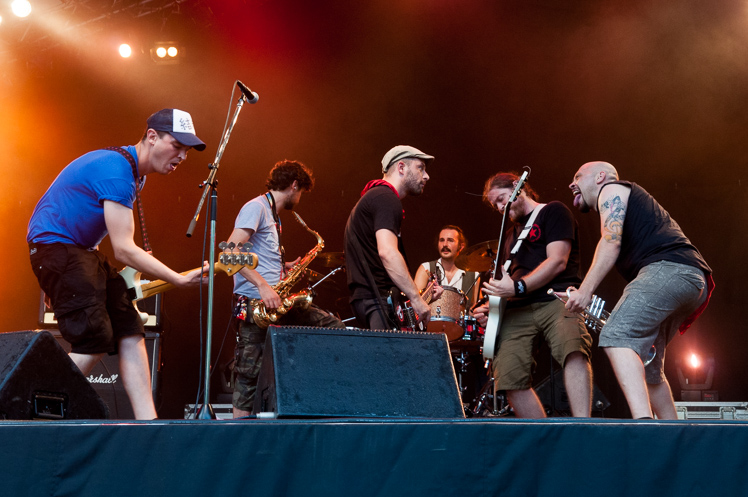 We interviewed Talco back in early June. In that interview, drummer Nicola Marango said that fans watching the group at Fuji Rock could expect “a non-stop energetic party!” He wasn’t exaggerating at all.

By all accounts, the band’s lunchtime Café de Paris set was a pretty wild affair. And things were exactly the same when the Italian ska-punk sextet took to the Orange Court less than three-and-a-half hours later for their second gig of the day.

As Talco kicked into their opening number, it literally took seconds for the Orange Court to turn into a big dance party. Trumpet player Rizia and saxophonist Cioro jumped and spun around wildly as the crowd cheered and tried to match the pair’s energy level. Someone in the middle of the audience soon began waving an Italian flag. But instead of being attached to a pole, it was connected to a fishing rod! Fujirockers certainly are resourceful folks.

Talco’s 70-minute Orange Court performance was the kind of show where it’s impossible not to have fun. The energy onstage and in the crowd was amazing and it was clearly evident that both the band and everyone in attendance was having a blast.

Prior to kicking into “St.Pauli,” much to the audience’s delight, vocalist and guitarist Dema exclaimed, “Fucking great dancers in Japan!” He soon had everyone chanting along to the song as they gleefully kicked up dust to Talco’s excellent party music.