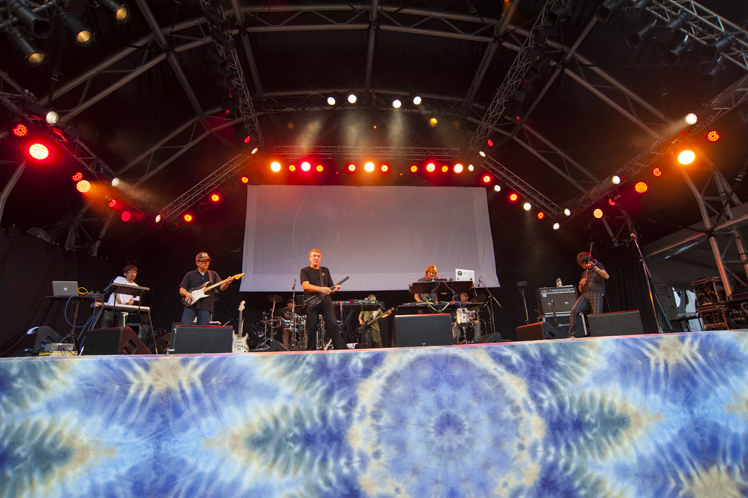 Rovo has played Fuji Rock several times before, but this year they did something different. For the past year or so, Rovo has been touring and intensively collaborating with System 7, the British electronic ambient group consisting of legendary guitarist Steve Hillage and Miquette Giraudy. Hillage, who turns 63 next week, is a UK pioneer of psychedelic, electronic music. In the 70s, Hillage joined the space rock outfit Gong, becoming a key member. He also started the first electronic dance tent at the Glastonbury Music Festival, and has a ton of other credits to his name.

Shows in the Rovo and System 7 tour have had two main formats. The first, long-form version has Rovo and System 7 playing separate sets, capped by a collaborative jam. The condensed version, which we saw here tonight, puts both groups on stage from the start, and they play a mix of songs from each band. Last fall, Rovo frontman Katsui Yuji, told me in an interview, “When I was young I dreamed of joining Steve Hillage’s band, and my dream has come true. Now I’m playing with Steve Hillage.”

The collaboration is seamless. Hillage’s electric ambient flows into Rovo’s electro-trance like two streams converging into a larger more formidable torrent. When Hillage traded his guitar licks for Yuji’s licks on electric violin, it was nothing like the traditional jazz circle jam, when the band leader nods his head to indicate, “Now it’s your turn,” and a new solo hops over the same chords. The handovers were organic sweeps over a more complex body, like tendons bridging one bone to another. Part, continuity, next part. Songs were jammed out for 15 minutes or more, and the grooves were more electric than electronic, seldom resorting to 4-4 bass thumps to drive the action. The groove was its own cosmic ride.

The start however took time to build, and the way the Field of Heaven stage is arranged, it had its greatest impact if you were directly in front of the stage, where you can feel the bass. But from about 6:30pm till the set’s conclusion at 7:20, it seemed like the blink of an eye. The groove was utterly compulsive.

At the very end, Yuji, who should be credited with sparking Hillage’s career, remained utterly deferential. He introduced Hillage and Giraudy. For the rest, he just said, “We are Rovo.”