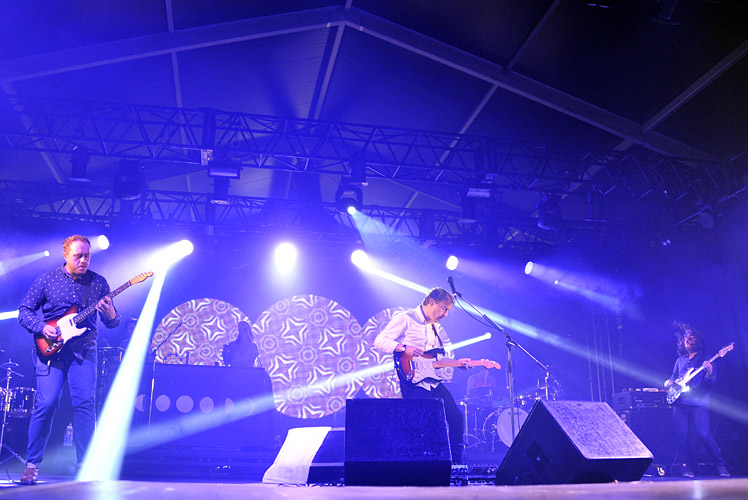 The Bombay Bicycle Club slide into their set with a pop beginning, keyboards providing the canvas for guitar, bass and Jack Steadman’s husky calm vocals to draw the song out. ‘It’s Alright Now”s highlight is the chorus with the blend of voices (including vocalist Liz Lawrence and Louis Bhose on keyboard) riding the song’s high till the end as the bouncing rhythm from Suren de Saram and Ed Nash on drums and bass respectively gets the crowd moving. Their sound is happy yet with a hint of forlornness lingering persistently. That wistfulness is soon forgotten as the opening hopping chords of ‘Shuffle’ get the crowd excited and moving and soon the muted guitar finally spreads its wings in a flowing, flowing solo movement.

‘Whenever, Wherever’ sees the band forego their rather subdued start for a more grandiose sound, the drums and keyboard pushing the other instruments forward powerfully. The band then strip back to the main four members, rattling off a semi-marching tune as the band’s sound continues to grow in power. There’s hints of almost psychedelic riffs (matched by the crazy images of their overall outstanding light show) and punk pop’s mild roughness starts to come through with this piece. The set is then brought down a notch, melodic guitar noodling of three guitars against Liz’ ethereal female vocals forming the introduction before Jack’s calm mild voice interrupts, the song evolving around his voice nicely.

The last third of the set is much more danceable, serpent-like keyboard snaking through thickets of bass and drums and an almost tropical feel stealing over the set. Overall, the set lacked a little strength (perhaps due to the mix pushing the guitars to the back) but their fans got more than enough joy out of it, judging by the audience’s adoring goodbye.