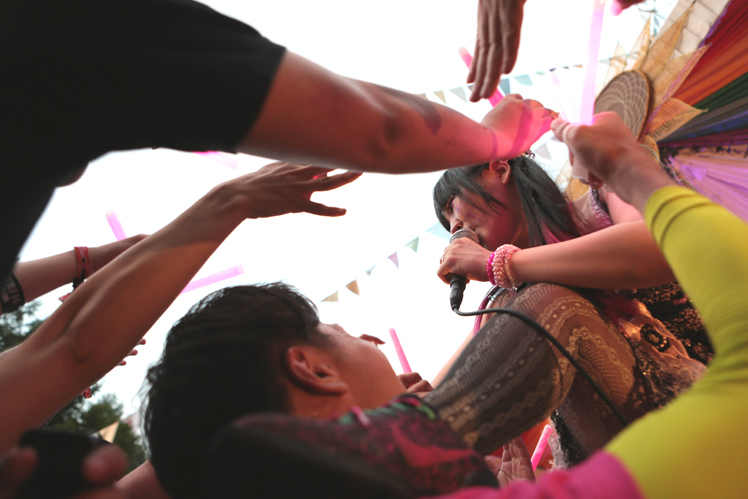 Oomori Seiko has built a reputation for being unpredictable, and her early evening set at the Gypsy Avalon Friday started with a trick. A peppy, blonde-haired singer took the stage clutching a teddy bear, and started performing a pop song over pre-recorded sounds. The portion of the crowd who came with pink glowsticks – it was a good portion – waved them along to the beat, but punters kept sneaking peaks behind them, as if trying to find someone. Then Oomori Seiko herself rushed through the back of the crowd and jumped on stage, joining the fake (who was Megumi Koshoji, formerly in the “anti-idol” idol pop outfit BiS) for a hearty “fuck you” – birds flipped proudly – and to finish out the track. And that wasn’t the last twist.

That bait-and-switch hinted at what Seiko’s been up to lately. She performs similarly up-tempo pop, and manages to perform at idol-centric festivals. Yet her roots are as an artsy performer, a singer-songwriter who first caught attention in the Koenji neighborhood of Tokyo with just an acoustic guitar. She’s not a traditional J-pop idol, but rather someone slipping into the belly of the industry and poking at it…and the bulk of her Fuji Rock set favored her unpredictable acoustic style.

Moments of beauty creeped through, breezily strummed chords crossing paths with sweetly sung vocals. But Seiko rarely lingered on those instances – she’d switch into shouts, or a higher pitch, or interrupt a chorus with fake coughing and choking sounds. Oftentimes, she’s deliver words in a rapid-fire way that made them all the more urgent. And they were all loud – before she really got going, she turned her microphone’s volume as high as possible, and milked that for all it was worth.

Seiko was being as confrontational as she could via her super-loud shouting…considering a summer festival is partially a chance for people to get away from things and sorta shut off a little, it was especially jarring seeing her gesticulate around the small stage while singing passionately about topics ranging from Disneyland to stamp rallies. At one point, she chucked her guitar’s capo into the air and performed a song sans instruments, which ended up being the most mesmerizing portion of her set. At one point, she wandered to the far right of the stage and began scream-singing at punters walking by. It was a jarring, at times abrasive show that drove away plenty…but also one that was hard to look away from once she dug into your skin, a very confident artist baring themselves without any hesitation.