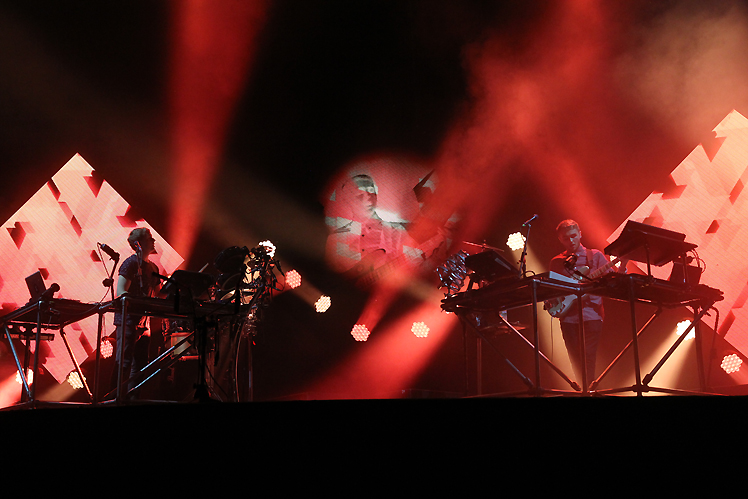 It popped up throughout the day, usually on a t-shirt or covering up the back of a tank top. Right before English dance duo Disclosure took to the White Stage Friday, someone lifted up a handmade sign which was several glow wristbands rearranged into it. And then it started appearing on the three screens set up behind the pair’s gear. It was the Disclosure “face,” and its arrival signaled it was time for the crowded area to lose it.

That image, a smart branding move, is just one of reasons Disclosure have become populist favorites. The brothers Guy and Howard Lawrence have picked up on the fact that electronic artists in 2014…especially ones playing at a festival..are not hosting a party, but performing a concert live, and so they can’t just hunch over laptops and call it a day. Yet instead of just jumping around and maybe pointing at the crowd, they show off skill. They smacked an assortment of digital drum pads and cowbells Friday night, while Guy routinely takes to a bass guitar.

At Fuji Rock, they also had a fantastic visual display to compliment their playing. Flames rose up behind them during the strutting “When A Fire Starts To Burn,” while other songs featured various geometric shapes flying about the trio of screens. Yet they oftentimes also complimented Disclosure’s emphasis on visually playing the music – many shots zoomed in on the brothers using their samplers, while other graphics put the focus on Guy’s bass playing.

Yet the main reason they had the packed White Stage moving and shouting along was their music, U.K. electronic sounds turned into pop bangers. It helps that, this far into their young career, they have very little bloat – they opened with the shuffling “F For You,” featuring vocal contributions from American singer Mary J. Blige, and from their hit on all of their most popular numbers, from their hitting on big-chorus affairs such as “You & Me” and “White Noise.” They saved the biggest for last – “do we have time for one more?” they asked, before Howard struck a pad and activated the stuttering intro to their biggest hit, the Sam-Smith-assisted “Latch.” Fittingly, as that one slow-burned towards its big release and the crowd sang along, the big ol’ Disclosure face projected behind the duo led them along.