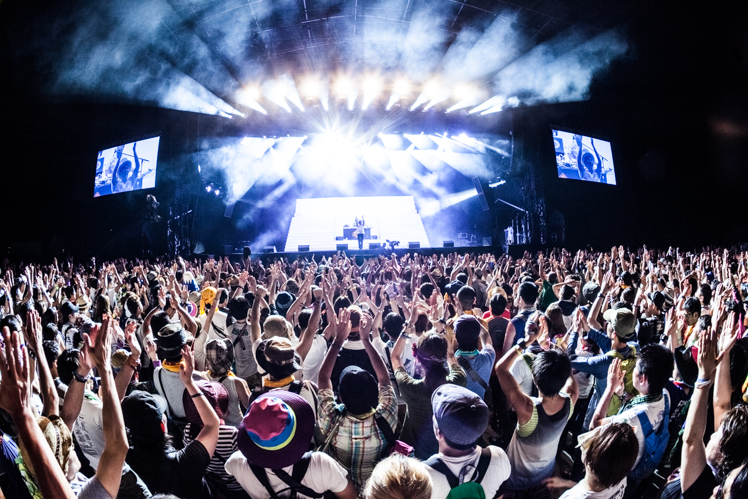 Konnichiwa, says a female voice. Denki Groove desu. A logo flashes on Green Stage screens, and the two DJs known as Denki Groove hit the decks running. Once known for their techno-pop, with some breakbeat and traces of hip-hop, Denki Groove (Electric Groove) was founded in 1989 and the duo (Takkyū Ishino and Pierre Taki) have moved through various styles of electronic dance and club music ever since. All of it was on display tonight, especially their recent turn towards German techno influences.

Visually, these sorts of shows rely on lights and visuals, and here they did not disappoint. The duo were set in the centre of an enormous and wide white staircase, which eventually exploded into rectangles of light. The visuals on screen ran the gamut from random words, lyric quotes, geometric patters, 3-d happy faces, floating snare drums, psychedelic tunnels – the usual sort of random eye candy that distract you from the fact that the artists themselves aren’t moving much.

Not that it matters – they’re there to make you move, and that they did. They were joined by two different vocalists, whose presence was crucial to some of the song structures, but overall were not the better part of the music. You could alter the songs slightly, lose the rhymes and melodies, and it would probably work better – but then they’d be a different group. What shone were the beats – mostly techno with elements of deep house and dub (okay, the dub happened once). “Shangri-La” almost breaches shibuya-kei territory due to its string sample; the song that followed turned surprisingly dark and robotic, only cementing the fact that this group has a fine grasp of almost any style they attempt.