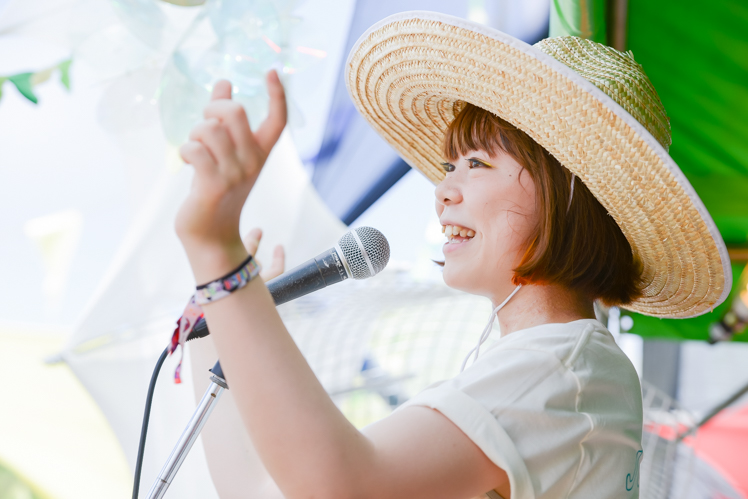 A hip-hop act entirely about food seems like it would run out of fuel pretty quickly. Sure, an album of food-centric raps could work, but building your entire identity around stuff you eat? Turns out it isn’t only doable but can also have very enjoyable results, showcased by the DJ Miso Shiru & MC Gohan project, a one-woman-accompanied-by-dude-behind-the-decks who usually spits about how to cook famous dishes. For the second year, she brought her offbeat recipe raps to the Day Dreaming stage, and delivered a fun noon set…that ended with free dessert.

After getting the sizable crowd physically ready with a silly take on Japanese radio exercises, the DJ cued up twinkly playroom-worthy beats for her to introduce herself over, and then she jumped into her first proper song – which doubled as instructions on how to create a meat-in-pepper meal. Those first two songs featured cute sonic additions – a pitched-up voice sometimes singing beneath DJ Miso Shiru & MC Gohan’s lines, similar vocal injections – but the biggest surprise of the early afternoon was the musical variety that soon popped up. A song about making fried chicken featured mournful piano and the sampled sounds of chickens clucking. The song “Kome” moved foreword on ragtime horns (!), while the next song adopted a disco groove. Best of all was, weirdly enough, on a song not about cooking food but ordering – a song about pizza (anchored by the all-together-now chant “P! I! ZZA!”) featured production built out of the sound of phones, doorbells and Internet sounds stumbling over one another.

DJ Miso Shiru & MC Gohan was plenty charming herself. She carried an awkward energy that made silly little gestures – lifting her hat up to the beat of “Kome,” attempting to make cool looking hand gestures, taking a late-set break to strum on a ukulele – all the more entertaining, while she wasn’t hesitant to get the crowd to sing along with a line like “1, 2, 3, 4, 5, bento!” Yet despite the funny nature of the project, the joke was never on hip-hop – the woman behind this studied up on the style, and this noon-time set used the genre as a way for someone completely out of rap culture to imagine it in her own way.

There was, also, food. Her shows sometimes end up being cooking demonstrations, and her sophomore Fuji Rock outing found her bring out a box full of in-progress ice cream that needed shaking. After demonstrating how it worked, a new song started up, and she handed the box to the crowd to shake with the beat. Near the end, she opened it up. “We did it, ice cream!” And she passed around cups of the sweet stuff for the audience to taste. A delicious ending to a very fun show.