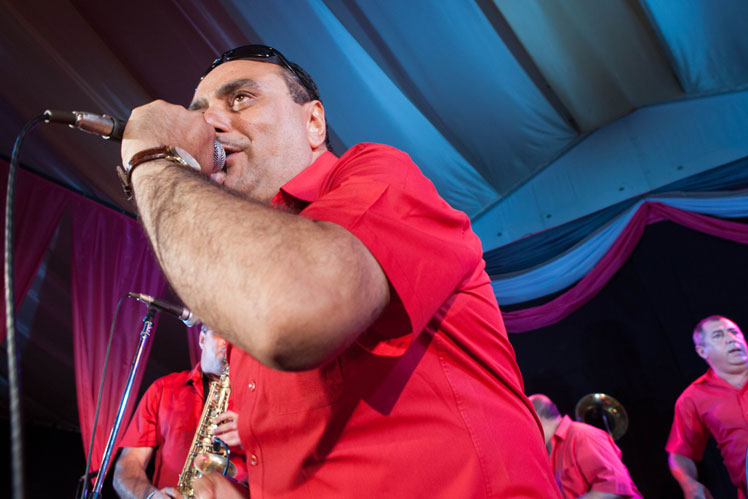 As the sun dropped on Friday evening, the weather at Fuji Rock started to cool and become much more bearable. Actually, let me rephrase that. It became cooler in all places except for Café de Paris. That’s because Fanfare Ciocarlia packed the intimate space with dancing bodies which resulted in sweltering temperatures inside. No one seemed to mind, though, as everyone (including fellow Café de Paris performers Big Willie’s Burlesque Fuji Revue) eagerly kept grooving along to the Romani brass band’s exuberant sounds.

Headlining Orange Court on Saturday, tonight’s show at Café de Paris gave fans the opportunity to get up close and personal with the dozen-member act. With ten horn players and two percussionists turning out a non-stop mix of Romani party tunes, along with bits and pieces of popular Western tracks like the Pink Panther theme and Steppenwolf’s “Born to Be Wild” mixed in at different times, spirits were high throughout Café de Paris. And while the music itself was enough to keep the crowd completely entertained, the band members up front added some line dancing mid-show and a bellydancer was even brought out to raise the festive mood. Fanfare Ciocarlia had everyone wave their arms from side to side as the bellydancer spun and shimmied around to the brassy goodness being created.  Inspired by the dancer and the Romani music, one fan at the back even rolled up her T-shirt and tried a bit of bellydancing of her own!