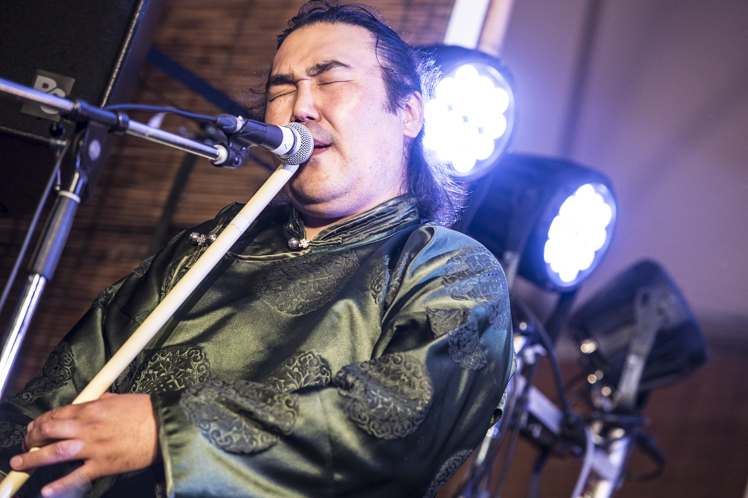 Here are four guys from a republic I’ve never heard of (Tuva), doing something I didn’t think was possible: producing rumbling bass notes and flute-like overtones with nothing but their vocal chords. They’ve got an arsenal of instruments too, almost none of which I’ve seen before, and it’s mesmerising.

But I figured I should grab a beer for the show, so I went to the nearest vendor, and when I came back the stage was empty. I wondered if the band had thrown a diva fit at the size of the stage, or the fact that you could hear The Birthday playing in the background. You know what Tuvans are like. If they’re not making flute noises with their larynxes, they’re moaning about the size of their performance spaces.

They may well have been unhappy about the noise from the Red Marquee, because as soon as that racket ended, the Tuvans were back.

Their leader is a one-time shepherd called Kaigal-ool Khovalyg. He politely thanks the audience for letting them play, then the band gets going again.

Their music is heady, powerful, stirring stuff. It’s giving me images of horses galloping across a screen, and this does seem perfect for a soundtrack. Khovalyg later tells the crowd that a lot of the songs are indeed about horses. I feel pretty proud of myself, though I suppose it’s them we should be applauding.

They’re all “throat singers”, but if today’s show is any indication, one of them is the maestro. He can make that bass, that flute AND something like a bird’s warble, all at the same time. God knows how.

It’s not the kind of thing I’m going to stick on my iPod, but it’s awe-inspiring stuff. They’re playing again at the Orange Court tomorrow. Go see it.