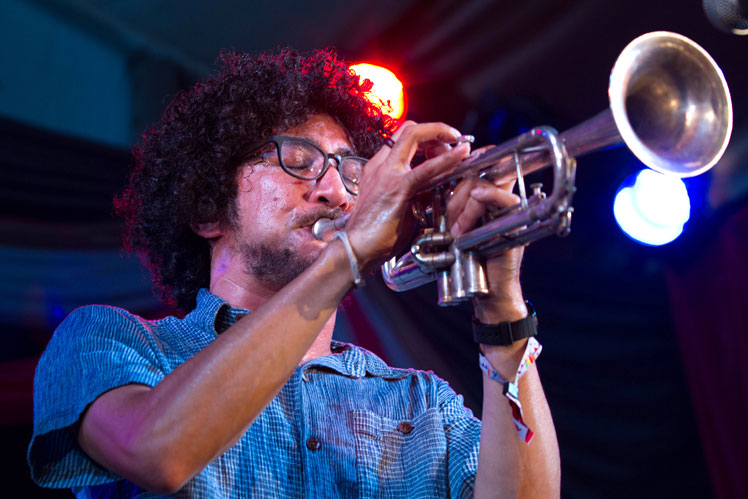 The cafe de Paris was a venue I was looking forward to visiting for a few reasons, the acoustics are good, it has a lively feel to it, the interior resembles more of an actual live-house or cafe. There’s also a big bar area serving drinks and tables and chairs set up around the perimeter. Some more personal, eclectic bands are often booked to this stage, Mitsukaze & Green Massive are a great representation. Mitsukaze Hamada leads his Green Massive, a Japanese ska and reggae band. He is very skilled at controlling both the band and the audience. I came into their set a little warn out and sitting at a side table, but once the band got going and the classic Jamaican sounds of ska, rocksteady and reggae started jamming I was powerless to do anything except skank along with the rest of the dedicated audience.

There’s something infectious about the back-beat and groove of ska and reggae, it reaches down to the consciousness in a primal way. The instrumentation of the band which included hand drums, an organ, an accordion, and a trumpet kept everyone (band and crowd included) dancing and skanking along for the duration of the set. The cafe de Paris stage isn’t one that many people simply stumble across, as it is the furthest stage from the entrance at the very back of the festival site. Most in attendance seemingly planned to make the trek. The crowd was very enthusiastic about both the band and ska/reggae in general. People were chanting, waving towels and flashing up their lighters whether called upon or not. The band played Fuji Rock last year as well and more than likely, this year’s performance drew many of those fans who discovered Mitsukaze & Green Massive last year and became hooked. I know they gained a dedicated follower in myself after today’s performance. Should the chance arise to see them again next year I wont pass it up I don’t advise you to either.