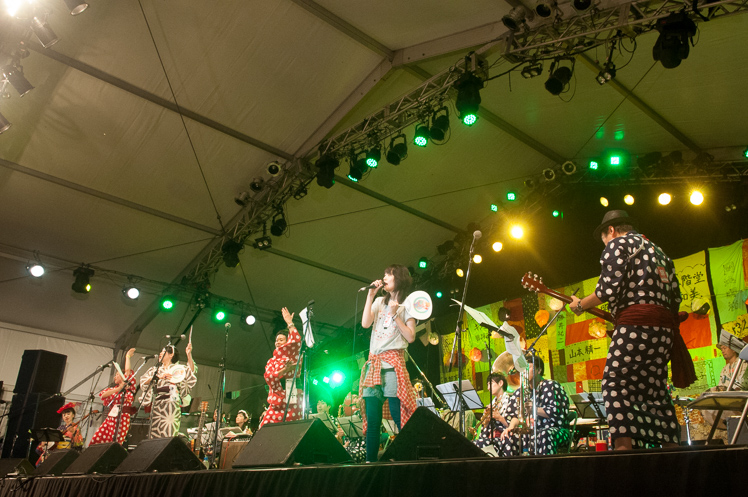 Composer and experimental artist Yoshihide Otomo’s musical talent has been recognized both over and underground since the 80’s with his noise band Ground Zero, and most recently by composing music for the hit NHK drama series “Amachan”. At the Orange Court stage on Friday, Otomo performed with his special big band’s Bon Odori (traditional Japanese summer dance) edition.

Otomo’s special big band was indeed special, composed of artists like Seiichi Yamamoto of The Boredoms and singer-songwriters Fuyumi Abe and Kazumi Nikaido, and indeed big, with a grand total of over thirty members on stage.

The big band’s first song was “Amachan Ondo”, with yukata-clad dancers teaching their audience all the moves to the dance one step at a time. As Otomo’s special big band spawned out of his project to support Fukushima, the dance was fittingly choreographed to pray for Fukushima’s harvest. Watching the crowd flail their arms and twist into knots in an attempt to dance was quite the sight.

Several dances later, the big band tried to herd the crowd into a traditional Bon Odori circle with the song “Eejanaika Ondo”. The audience was instructed to bust out their standard Bon Odori moves for the chorus, shake their body with their hands in front like electrocuted zombies during the rap, and hold hands with neighbors during the instrumental part of the song.

It was all smiles during the show as no one was afraid to look silly trying to dance. Orchestrating a huge crowd to dance in sync is not an easy task and is one of those special sights you only see at a festival as friendly as Fuji Rock.