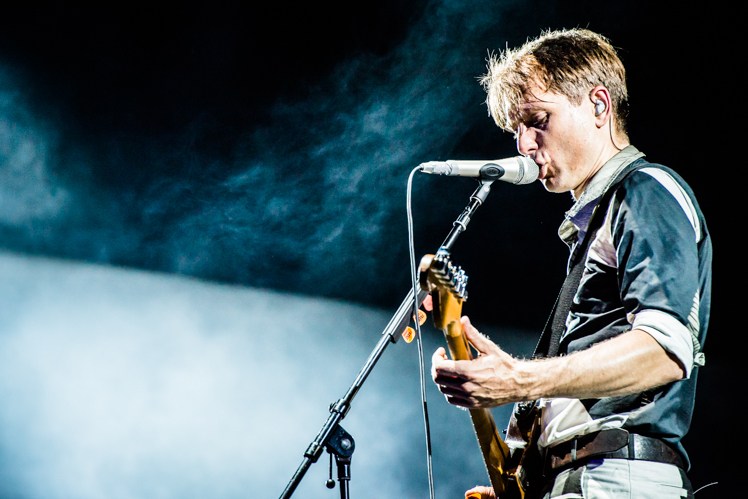 One wouldn’t expect Scottish indie rockers Franz Ferdinand to headline a festival in Asia, but there they were…and it was oddly appropriate. Not because the band, formed in 2002, have any particular thematic connection to Japan, but because their dancey guitar rock was somehow equal parts boisterous and relaxed. It’s a suitable way – physically and mentally – to round out a day. Many danced, but those who didn’t seemed equally happy to be there.

Franz came to popularity with the explosion of “dance punk” (though there’s not a lot of punk in this particular band) and they’ve retained those angular guitars, bouncy rhythms and sardonic vocals. Of course, in a live setting, hearing an overview of songs from their four albums, you realize singer Alex Kapranos is more sincere about his lyrics than you might have thought.

Ferdinand weren’t particularly arresting on a visual level; the band are solid players, but they generally just play the songs, straight up, with the assistance of the usual light show augmentation. They do so with a good amount of energy, though, which is more than enough for fans. Kapranos was especially engaging, inserting the words “Fuji Rock” into a good number of songs to amp up the audience. He has the big venue festival routine down, and keeps it just this side of cheese.

They ran through the hits, the fan favourites, and few extras, and they did make some attempt at shaking things up, when most of the band joined Paul Thomson at his drum kit to assist in a big-ass drum solo outro (which sounds absurd, but was actually pretty cool).

While it may have been a fairly straight-forward show, Franz Ferdinand delivered what they needed to deliver – the songs – and they did it well.