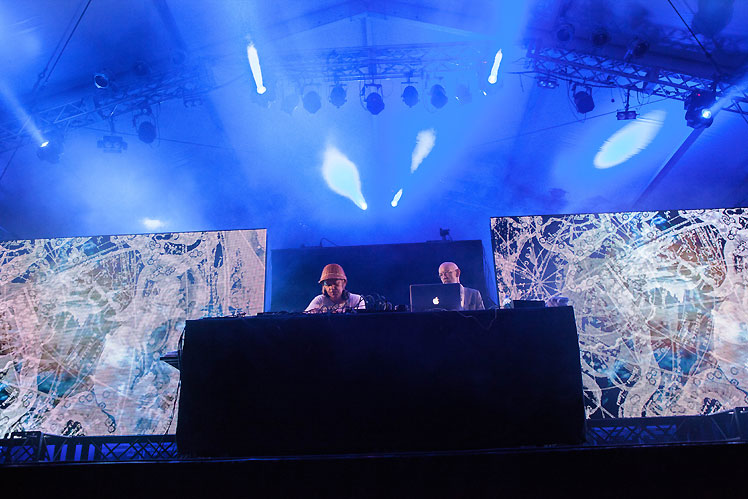 The Orb’s set Friday night at All-Night Fuji may as well have been part of a technological experiment to see how much bass could be produced by a concert sound system. The Orange Court clearing is a big dusty oval about 200 meters on the long axis, and for this set it was like one big lake of bass, and we were all swimming in it. It wasn’t even really a rumble, or a wave, because it never seemed to not be there. It was more like an ever present vibration. For those who stayed for the entire set, it was quite possibly able to dissolve an malignant tissue growths lurking unknown in their bodies.

It’s no secret that Alex Patterson has been doing this for a long time. Now a doyen of the scene, he was at the controls with long time collaborator, Thomas Fehlmann. Consistent with the group’s 2013 album, More Tales from the Observatory, which was produced together with Lee “Scratch” Perry, the set was grounded in very heavy dub. The beats were never fast, just utterly enveloping. The Orb has a reputation for “music to come down to” and that was perhaps the one weird or incongruous thing about this set. Scheduled for 11:30pm till 1am, it was kicking off an all-night party rather than capping one off. I would actually love to see them at Daydreaming, playing at 10am high up in the local alps. A high mountain lake of bass. Maybe you would call that a wobby tarn.