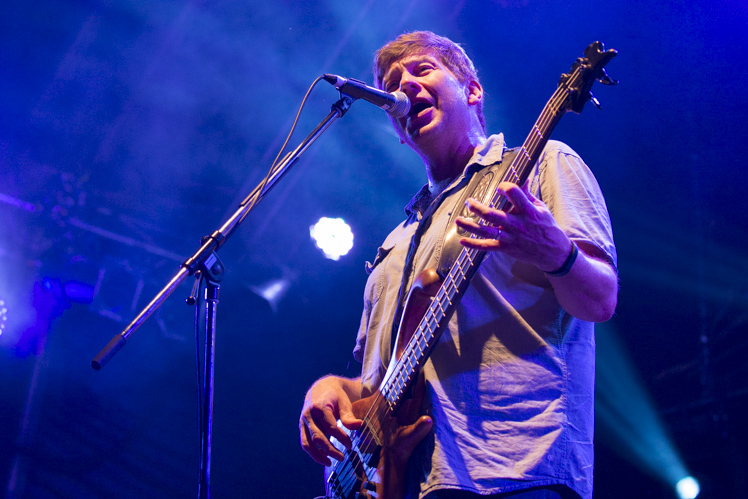 Moe are rambunctious, rambling and groovy as all hell. The sound is jazz strolling through the history of rock and roll, appropriating moments, sounds and chords to play with. There’s the technicality and excess of progressive rock, with most songs lasting well over 6 minutes, the soul of jazz, with each song seeing members instinctively playing off one another, and the brass balls of rock and roll, with each song alive with attitude. In short, it’s great to see them back at Fuji Rock after four years with their unending assault of improvisation.

The guitar players Chuck Garvey and Al Schnier are the part of the band that initially grab you, either through their choppy riffs or with one of their lengthy, virtuosic guitar solos (the longest I experienced lasted for about three and a half minutes). But once you get past the melody, the bassist Rob Derhak demands your attention with his infectious and deep-seated groove. After peeling away that layer, you come across the remainder of the rhythm section in percussionist Jim Loughlin and drummer Vinny Amico. Vinny’s full kit allows for an all-out attack on the limits of rhythm, pulling off work that even an octopus would envy. Jim matches him beat for beat, as proved in their spectacular drum battles, whether its on his smaller standing kit or with the clear crystal chimes of the xylophone.

One of the most important things as a jam band is your understanding of one another, so that the song can progress and the transition between instruments is simultaneously smooth and natural yet surprising. These guys’ history together shows through in their pure professionalism and refusal to let any song become too comfortable for each other. There’s always something bubbling away and there’s always somebody ready to take up the baton to deliver the next part, whether it’s a blazing solo or a simple beat change that slowly evolves the song to the next stage.