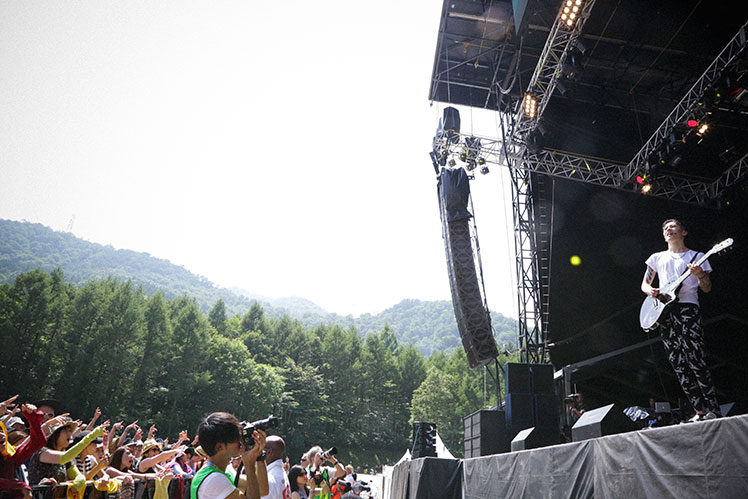 “Let’s sweat, sing and dance together”

With a musical career spanning about one and a half decades, Miyavi has grown over the years—as has his approach to music. From not-so-humble visual-kei guitarist beginnings in Dué le Quartz he moved quickly onto to a successful solo career with management company PS Company, and finally went completely independent with his own company J-Glam Inc a few years ago. He has never been afraid to experiment with different styles and instruments—constantly renewing and evolving with each album released. Touching on everything from lavish artistic exhibitions and collaborations with multiple Japanese and international artists to using classical and electronic samplings—he’s done it all. This musical chameleon has a huge fan base abroad, while back home his following is smaller, but fiercely loyal. Appearing at Fuji Rock is almost like a comeuppance—proof that his work has reach in broader Japan.

And the gratitude for that seemed to shine from him. He repeatedly exclaimed how thankful he was to be at the festival, and what a great experience it was to finally be a part of “the fes in Japan that represents what a fes really is”. The audience shrieked his name (with the occasional “Bobo!” for the drummer) between every song indicating, perhaps, that they were more excited about him being there than he was.

The set was short and Miyavi was jet-lagged, though the only indicator of that was him telling he audience so. He and swim shorts-clad drummer Bobo stuck mainly to songs from his most recent albums What’s My Name and last year’s release, Miyavi. Highlights included techno-pop hit “Ahead of the Light” and “Let’s Cry Like This”, a song that felt appropriate because of the heat:

“In the blazing daylight, the sun burning down on me”

The biggest crowd pleaser though (the one that had a security guard climb into the pit to get people to calm down because they were getting too rowdy), and one of the best songs to showcase his distinctive “slapping” playing style was “Survive”. No other song demonstrates the absolute rawness and simplicity of real rock’n’roll. It shows how Miyavi went back to basics after he left the visual-kei scene. On stage it’s just a man with his guitar: the only two constants in Miyavi’s musical adventures, and the only ones needed. (Plus Bobo the drummer!)

If you didn’t catch him in Naeba, be sure to look him up for his Japan tour coming up in September—you won’t be disappointed.