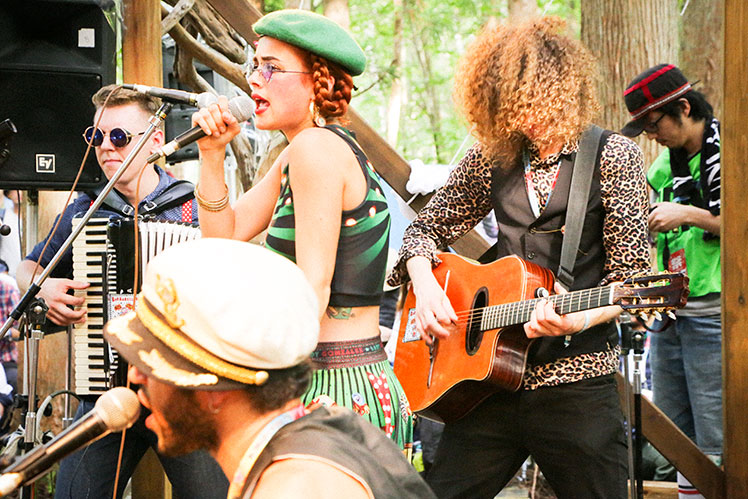 Friday wasn’t exactly jam-packed here at Fuji Rock. I’ve heard it was one of the lowest attendances of all time. That’s great for those of us who don’t want to queue for a loo, a pizza or a Thai massage. But it was a bit of a shame for the acts that flew around the world to perform.

The Basement Jaxx show was reportedly rammed. I didn’t see that. The only act I saw that drew more people than the stage could handle was Barbarella’s Bang Bang. I had to squeeze into a spot directly behind a tree.

How does a virtually unknown band, playing their first ever show in Japan, draw this kind of crowd? Perhaps it was because Oshow from Asakusa Jinta was playing with them. Or perhaps people had done their research and knew this would be a killer show.

Oshow played a relatively low-key role, standing at the side, plucking his double bass. The star was singer Barbara, opening the show with the only good kazoo performance I’ve ever seen. It set the tone perfectly: highly skilled, and utterly barmy. At other points, she’s using a guiro, then a child’s glockenspiel.

They’re playing klezmer, and having so much fun with it. We get covers of Hendrix (Gypsy Eyes), and a frantic rendition of Nancy Sinatra’s “Bang Bang (My Baby Shot Me Down)”, with the kazoo again. By the time they finish with their own “Here and Now“, they’ve run over their time slot, because the band, the audience and the stage managers all wanted this show to go on and on.

Later in the day I saw quite a few people wearing BBB t-shirts. Job well done.