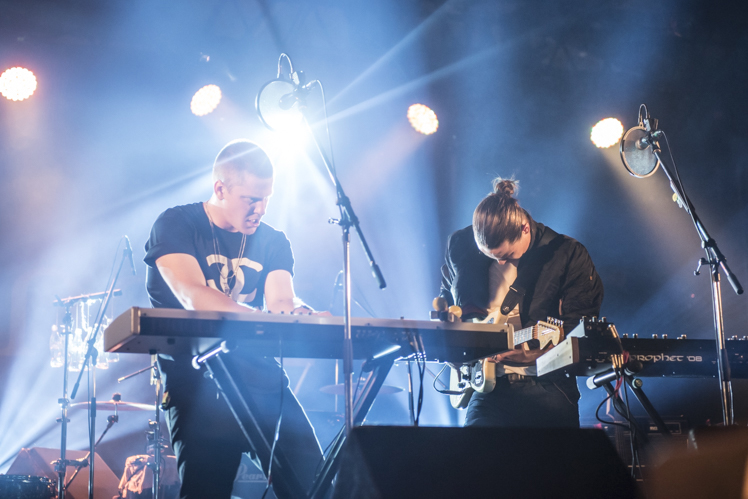 Last year saw UK soul act Jungle quickly capturing the attention of the British music scene. The band released a couple of very cool singles but trying to keep a low profile, the masterminds behind the group – producers Josh Lloyd-Watson and Tom McFarland – left people guessing about who exactly they were by simply calling themselves “J” and “T” and not having their images appear anywhere. This resulted in NME labeling the pair “the UK’s most mysterious act.”

The last few months have seen more info being revealed about Jungle as the group have been doing press to support tours and the release of their eponymous full-length debut which came out two weeks ago. But considering the early secrecy about themselves, I was admittedly a bit worried when the band played their opening cut Friday night at the Red Marquee in near darkness. But the lights soon came on to reveal a five-piece band with “J” and “T” standing center stage behind a keyboard and synthesizer.

Showcasing soulful, electro-infused material from their new album, Lloyd-Watson and McFarland sang all of the tracks together with a female backup vocalist occasionally joining in as well. Between songs, the two repeatedly thanked the audience and complimented the festival and its stunning surroundings. And here’s something you should know about Fujirockers, we know how amazing the fest is but we’re still very susceptible to flattery!

Everyone in the Red Marquee – including members of Green Stage act The Heavy who were hanging out in the middle of the audience – grooved along to Jungle’s infectious tunes throughout the group’s 45-minute set. They closed things out with “Busy Earnin’” with many in attendance clapping along to the fantastic, funky number.