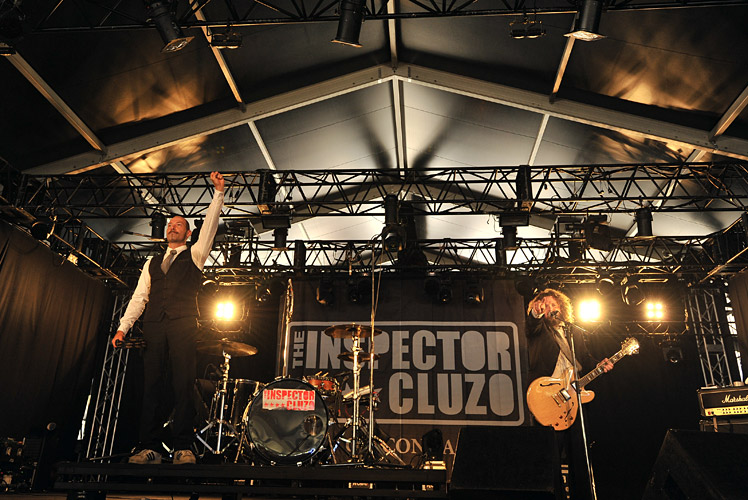 It’s been five years since The Inspector Cluzo last played at Fuji Rock. And while watching the band’s awesome early morning set at the Red Marquee, one thing kept popping into my mind – what the hell has taken so long to bring them back?

Bands who play the 10:20 am Red Marquee slot usually draw pretty well simply because none of the other stages are open yet. But for The Inspector Cluzo the stage was packed with people. In my 10 years of working for Fujirock Express, that’s the most full I’ve ever seen the Red Marquee for a morning performance.

When The Inspector Cluzo performed at FRF ’09, very few of us had any idea who they were. But after gigging several times during that year’s fest the group definitely had made a name for themselves here in Naeba. And for good reason as the French duo’s concerts are funny, entertaining, and flat out rock.

Right from the start, everything guitarist Malcom Lacrouts and drummer Phil Jourdain did was met with a roar of approval from the crowd. After turning out a few bluesy rock cuts, Jourdain felt like getting up and moving around. Walking to the edge of the stage, he started to show off some disco-inspired dancing as the audience clapped along. Lacrouts began crooning in a high-pitched voice, “The fucking drummer wants to dance all night long,” before pausing to tell Jourdain to jump up on the kick drum. Doing so allowed all the people in the back to also see his fine array of moves. Lacrouts soon shouted, “We want you all to dance, not the fucking drummer.” Jourdain hopped back behind his kit and the band began banging out “Two Days.” Following Lacrouts’ request, the bulk of people in the Red Marquee were soon bouncing and grooving along to the hard, funky track.

The Inspector Cluzo followed “Two Days” with fan favorite “Fuck the Bass Player.” Introducing the song, Lacrouts said, “Fuck the French president. Fuck all the politicians in the world. This is for we the people.” The audience cheered his words and were soon singing along to the playful, anthemic lambasting of all the world’s bassists.

Finishing the song, Lacrouts invited a man and a woman from the audience to come up onstage. He asked the girl to dance while he sang and then turned to Jourdain and said, “Hey drummer, this is for you, motherfucker.” On cue, Jourdain came over and began slow dancing with the young lady. Then he asked the guy to come over and dance. Feeling the man was wearing too much clothing, Lacrouts told him to take his shirt off. Once he was topless, Jourdain slow danced with him too eliciting lots of laughter from the crowd.

The band closed out their too-short 40-minute set with “Put Your Hands Up,” which the audience gladly did. The Inspector Cluzo will play again tonight at 10:40 pm on Naeba Shokudo. Despite Arcade Fire playing right next door, after seeing how much everyone loved them this morning, I’m sure The Inspector Cluzo will have no problem drawing plenty of fans to rock out and have fun with them again.