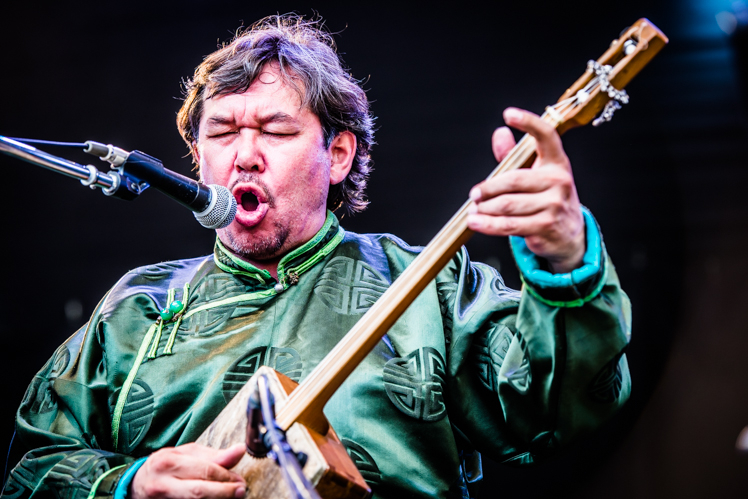 Difficult-to-pronounce but thoroughly enjoyable Huun Huur Tu hit the Orange Court first thing on Saturday morning with their traditional Tuvan throat singing and folk music. The crowd was separated into two groups: the hardcore fans who could take standing under the beating sun for a close up view, and the others who preferred a less taxing way to enjoy the show, by sitting in the shade on the outer edges of the Court. All audience membersーregardless of locationーwere focused on the performance with an intense gaze, but calm demeanor. Most simply stood and listened as the band played, only letting out wild cheers and applause between each song.

Huun Huur Tu also appeared to radiate calm as they sat, played and talked. They spoke of Tuva, a Russian Federation republic on the Mongolian border, where they are from. They explained throat singing was a traditional style of singing that produces three notes simultaneously. The fact that this didgeridoo-like sound is created by the human body is an impressive and almost unfathomable feat, even when performed in front of your very eyes.

Songs had different themes, including the Mogun-Taiga, a sacred wilderness that includes two large mountains, springs and forests. The percussion rolled, bringing up images of waves and winds, while wind instruments imitated birds singing and insects chirping. The sounds come from nature, and are recreated in musical form. It is truly a spectacular experience.

The most impressive and realistic theme though, was that inspired by horses. Like the nearby Mongolians, horses are an intricate part of daily life, the band explained. Horses are an important part of the culture, as well as each family unit. The third song of their set, “Chira-Khoor” conjured up images of a horse trotting across the steppesーthe percussion recreated the clip clop of hooves, the strings reminded of a horse whinnying, while the vocalists imitated long snorts. The final song of the set was also about horses, but this time more about the competitions and races Tuvans hold regularly. Musicians attend these events and often improvise, creating new material inspired by the excitement and competitive spirits. Titled “Eki Ataar” (meaning the most beautiful and fastest horse), this fast-paced and energetic song got the heart racing, and the mind cluttered with visions of galloping horses in faraway lands. As Huun Huur Tu left the stage the images faded and we returned to Naeba, but with a little piece of our hearts still in a distant land.