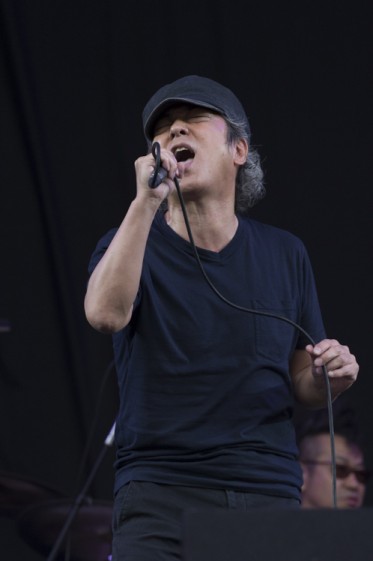 Sano Motoharu started making music in 1980. Now 58, he’s racked up over 30 releases and is one of Japan’s most famous rock singers. Yet on stage with the Hobo King Band, there was nothing particularly dated about his sound – at least, not dated anywhere between 1980 and today.

Preceded by his nine-piece band the Hobo Kings, Motoharu came to the stage amidst sirens and street sounds, clad in a black T-shirt, cap pulled low over his brow. The ensuing set brought to mind a funky Bruce Springsteen, Wings, Jackson Browne, and the lighter side of ’70s FM radio (except, you know, sung in Japanese). This is entirely the result of the Hobo King Band’s arrangements, particularly the E-Streety piano quality and overall density of their sound. They never quite rocked it out like the E-Street band, though; there were no “Rosalitas” here (though there was an “Angelina,” one of his oldest hits).

Instead, the performance was fairly low-key; languid, even when upbeat. He began with a bit of rap-like vocal that somehow wasn’t cringe-worthy – perhaps because he spent time in New York when hip-hop was in its early days and was one of the first to bring the music to Japan. Otherwise, his vocal style is also restrained – there are no warbly dramatics from this Motoharu. His performance was no-nonsense; at times it probably could have used a little more nonsense, though by the end of the set, as the band cranked the dial up a notch – not quite to “rock” but beyond “Band On The Run” at least – he seemed to loosen up and play with the audience more. What he didn’t do was speak to the audience, other than to introduce his band. It didn’t come across as rude, merely another illustration of his understated vibe. He may not have rocked the audience per se, but the lack of bombast and, frankly, the lack of cheesiness was appealing.