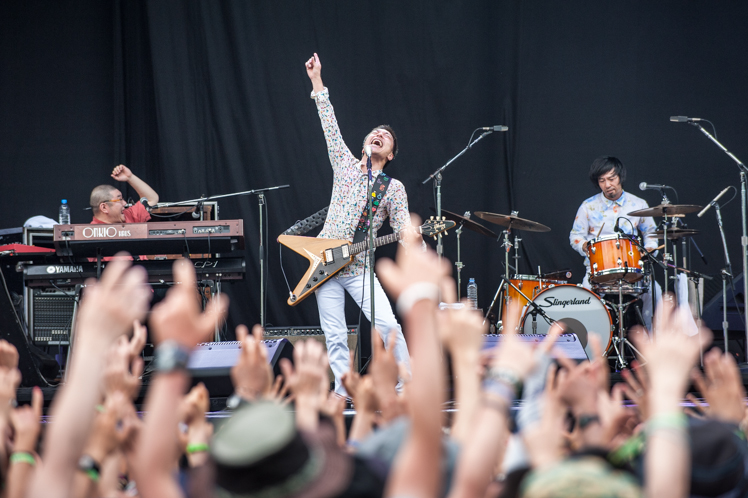 For 25 years Urufurus have been writing a kind of rock’n’roll that manages to be immensely popular while staying outside of most Japanese rock cliches. Not that it’s wildly original – some rootsy songs here, some boogie woogie piano there, some MOR ballads and mid-tempo melodies mixed in – but it’s simply not trying to be anything other than it is.

That’s how they came across just after noon on the Green Stage – poppy, popular, but somehow unaffected. Singer Tortoise Matsumoto (probably not his real name), clad in a white, colour-spotted shirt and tie to match, beamed with good humour, often thanking the enormous crowd for being so enormous (especially in the second Green slot of the day). Still, for me, the star of the show was the hired gun keyboardist, a chubby, bespectacled fellow in a red shirt and an all-compassing open-mouthed grin that never quit, as if his face had frozen as a six-year-old opening the best Christmas present ever.

The crowd was with them the entire way as they ran through their set, which included hits as well as a Japanese-language slow-down of Summertime Blues. As their drew out their last song and Tortoise left the stage, the remaining band members engaged the audience in a chant-along to bring him back, blow a little harmonica, and end out the show. Good-natured, cheerful and solid as a rock, Urufurus proved why they’ve been around so long and stayed on the Japanese music fan’s radar.