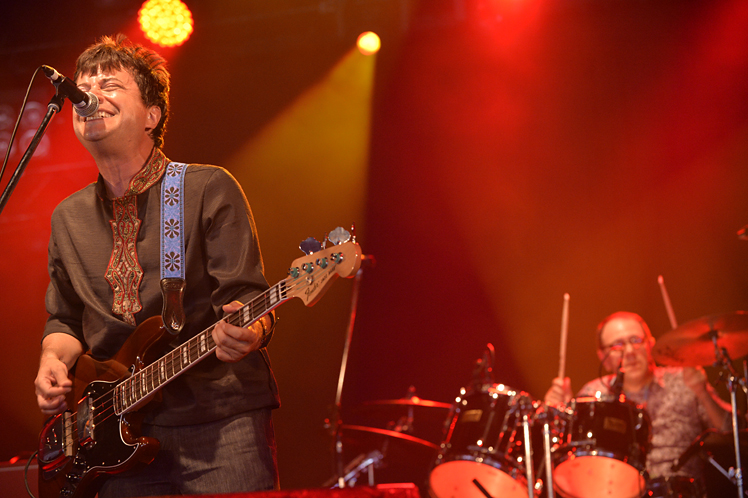 At the end of the show, some kid comes up to the stage and Louis Gutierrez leans down to let him hammer away at the strings of his guitar. He puts it on full reverb, while the drummer’s still banging away. One by one they all walk off, until someone has to come back and stop it.

One of my colleagues comes up at the end and says THAT’S how he’d end every show if he were in a band. Rock ‘n’ roll. I had the opposite view. The last thing I remember hearing from this show is an endlessly reverberating guitar noise that made my hangover significantly worse.

The bits before that were good though.

Later, there’s another debate about the end to the show. Some people say the kid in the cap was Cornelius. Some people don’t think it was. He’s listed as member of tonight’s Plastic Ono Band, so he’s definitely here. And it certainly looked as though he knew what he was doing with a guitar.

Anyway, the rest of the show: they played their songs and they covered The Beatles’ “Tomorrow Never Knows”. They played more like 20-somethings than 50-somethings.

There were people wigging out on the nostalgia, and there were people standing around looking like they’d turned up because the Red Marquee is the first stage you reach in the morning.

My colleague was raving about them after the show. He remembers them from back in the day, and started reeling off a list of bands that wouldn’t be the same without The Three O’Clock. I’ve no idea if he’s right. But it was a fun little start to the morning, except for that nauseating ending. People did that reverb thing in the ’80s, but they don’t do it anymore, do they? If you’re going to revive rock theatrics, let’s see you smash your guitars up.