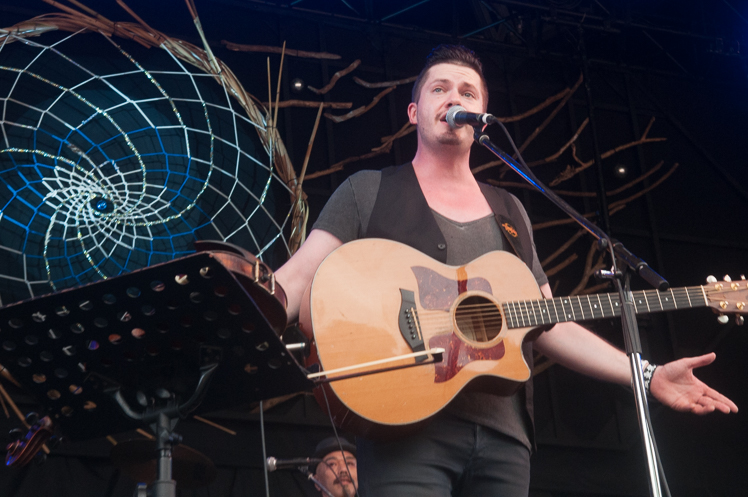 Toshi-Low is a busy man this weekend. He made a guest appearance on Friday with Route 17 Rock ‘N’ Roll Orchestra, he’s doing a solo set on Sunday, and he’s playing twice with Overground Acoustic Underground. Saturday, the band appeared in Field of Heaven and on Sunday they’ll be doing another set at Pyramid Garden.

Saturday afternoon saw Overground Acoustic Underground playing to a sizable crowd at Field of Heaven. Preparing to release a new album in September entitled “Follow the Dream,” the six-piece act shared the disc’s first single, “Making Time” early in their performance. The upbeat number had an Irish folk song feel to it and judging by the smiling faces in Field of Heaven was very well received.

Overground Acoustic Underground features a drummer, a percussionist, a standup bassist, and two acoustic guitarists. The sixth member of the Japanese band, the America-born Martin, plays violin, tin whistle, and also acoustic guitar. His switching between multiple instruments adds a lot more depth and diversity to the band’s folky catalogue of music.

Both Martin and Toshi-Low took turns handling lead vocals. The latter’s “Yume no Ato” was definitely a highlight of the 50-minute set and its beautiful, soft rhythms were perfectly suited for a sunny afternoon in the Field of Heaven. “Thank You” was a crowd favorite too. The song itself was good, but it was the ending that the audience loved the most. As the track was winding down, the band’s drummer jumped up and grabbed a pair of huge, comedic drumsticks to bang on his kit with a few times. His playful gesture earned him laughs and cheers from all in attendance.