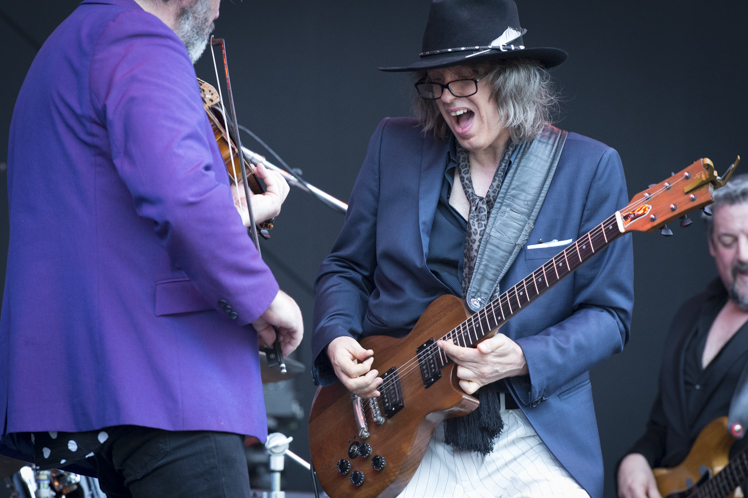 It was an excellent afternoon to see the Waterboys, who made their first ever appearance in Japan. The band started with their hit song “Whole of the Moon” drawing the festival audience near. Though it was early in the afternoon, many had made their way to the Green Stage to see this seminal UK band. As expected, nearly everyone in the front row barricades was swinging to the music. Mike Scott was resplendent sitting behind the keyboards for the opening number as the crowd steadily grew.

After that it was “The Pan Within” hinting at the band’s spirituality, leading later to a dueling guitar and violin attack which was part of the traditional song “The Raggle Taggle Gypsy” which got the crowd growing. And then the band came out in masks with a black faced mask worn by the fiddler and the keyboardist while Scott chose the Tri-muchti mask dating from 920 AD or three-faced mask representing Krishna, Vishnu, and Rahman in Indian culture. A modern translation of this imagery would be the duality of mankind with the third face being the actual source of inspiration. This dramatic performance concluded with Scott quoting the W.B. Yeats poem “The Second Coming” with the well known refrain the “falcon cannot hear the falconer”.

And then it was time to conclude, and the band played “This is the Sea” to the delight of many in the audience who bounced along and had a grand old time. Scott and bandmates appeared for a bow onstage and expressed their desire to return to Japan in 2015.