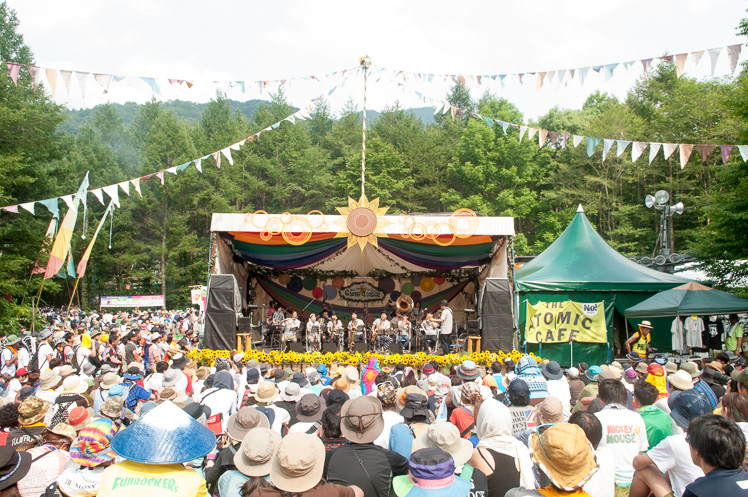 Gypsy Avalon is not the biggest stage at Fuji, but with careful seating arrangements, it managed to hold one of the more populous acts on this year’s bill. The Otomo Yoshihide Special Band (or Special Jazz Band or Special Big Band – depending on where you read it), all 16 members, performed as part of an Atomic Cafe talk, bringing some of Otomo’s more “mainstream” music – if you can call jazz or free jazz mainstream – to the packed-out venue.

Otomo is often known for his ensemble improv, solo experimental music, or his famous noise group Ground Zero. Off the skip, he made a joke that today, noise music was off the docket. The guitarist and band leader was congenial throughout, cracking wise with the audience and sweetly introducing each member of the group.

They performed a mix of songs, written and/or inspired by the likes of Eric Dolphy and Charlie Haden. They began with a strange oom-pah-pah melody that flipped over into jazz, and moved into a Haden tune that began with a long, leisurely saxophone intro. Otomo was never afraid of keeping the music quiet and contemplative; he was also never afraid to let it build into a squall of cacophony, hammering at his guitar with aplomb. At times, it mimicked the sounds of his Ensemble Cathode works, despite his promise of no noise.

Special guest and Ground Zero bandmate Sachiko M joined the band to sing a number; despite not being the strongest jazz singer – or maybe because of it – her performance accented the fact that Otomo approaches jazz from a different perspective. Even when the group was playing what sounded like standard modern jazz, there were instruments squonking and snaking about under the main melodies. It was a memorable performance from one of the legends of the Japanese avant-garde.