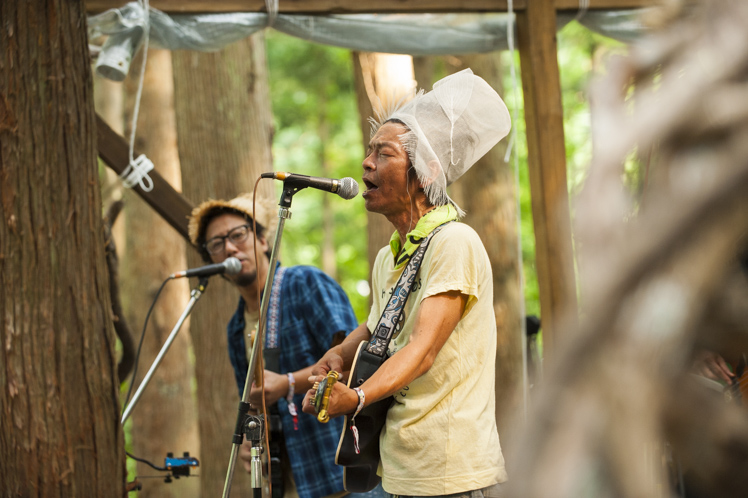 The hippies were all around Saturday at Fuji Rock, many highly anticipating Grateful dead founding member Phil Lesh’s Saturday night 3 hour set at the Field of heaven stage. However, earlier in the day nestled in the adjacent woods on the tiny Mokudotei stage a group of Japanese hippies, clearly influenced by music from the Grateful dead and others, jammed out in their own way.
The group, Seikatsu-Circus Trio&Yaoao, were the image of how you would expect an aged hippie rock/jam band to look. I don’t want to sound like I’m using the word hippie in a negative sense, as I very much enjoyed this band’s performance, their emotion and the emotion they elicited in the audience, myself included.

The group was made up of 6 members wearing loose fitting hemp clothing, overalls, floppy hats and wearing sandals or no shoes at all. Instrumentation included a female member playing electric melodica and a guy on didgeridoo as well as guitars and drums. The tunes had a jam band feel to them, while the lead singer had an unexpectedly high pitched voice and would often speak like a child or make silly jokes and comments. The group all the while laughed along and had fun, which affected the audience who quickly adopted a similar mind frame. There was a joy radiating from the group in just being able to share the music they loved. This emotion transferred to those of us surrounding the band, clapping and smiling along, while sitting on wooden logs in the forest. The lyrics mainly spoke to love, and nature which couldn’t have fit better given the surroundings. Their music didn’t have to make some grand statement or progress musical standards. It needed simply to exist, to be played with joy and in turn that joy would be spread to those with an open mind. They were silly, their songs were childish, but I didn’t want it to end, I was beginning to understand how jam band fanatics spend hours and hours sharing and spreading the nice with their favorite bands.