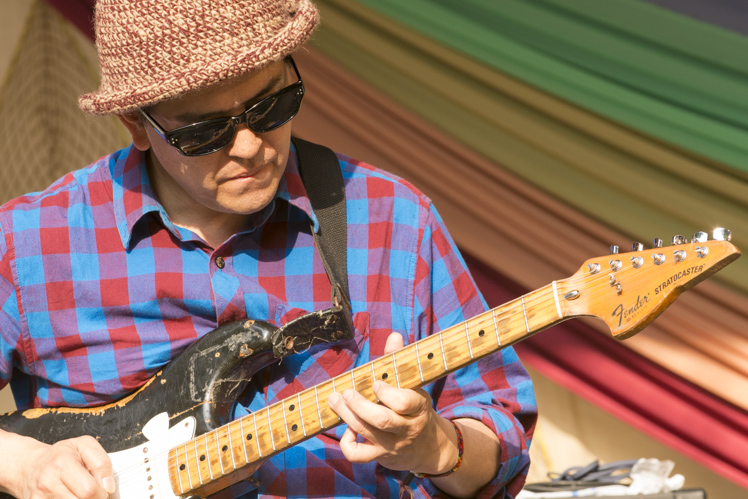 The foursome of avant guitarist and one-time Boredom Seiichi Yamamoto, Bondage Fruit violinist Katsui Yuji, drummer Numazawa Takashi and Naoyuki Uchida on the “dub mix” promised something unusual – the space stylings of Rovo members Yamamoto and Yuji echoed up into a space rock dub jam. Uchida, however, was conspicuously absent from the Gypsy Avalon stage, and the resulting set sounded like Rovo by way of Tsurubami by way of Can.

If that makes absolutely no sense to you, congratulations, you have a life. It’s like this: Yamamoto and Yuji are renowned experimental musicians and improvisation artists. Their set – one continuous suite that lasted over 45 minutes – was to the sky what regular jam bands are to the earth. It was improv, technically a ‘jam,’ but the Grateful Dead similarities end there – unless you count “Drums/Space.”

Gah, another comparison – sometimes I suck at this. Let’s try it this way:: starting slow and quiet, Yamamoto’s processed guitar sounds created a shimmering backdrop; he didn’t riff, but rather spread his guitar sound out like a glimmering net behind Takashi’s loping drums and Yuji’s virtuoso fiddling. “Fiddling” sounds more organic than is proper, though; he too used pedals and electronics to process his sound, giving his violin an otherworldly echo. The set would stretch out, with lots of space, and then speed up, slowly, each performer taking a different route, using a different style, to reach the same location. Playing off each other effortlessly, they created a piece that swelled and simmered, the soundtrack to movies about sunrises in space, until it finally galloped to a finish with a rock’n’roll inspired freak-out.

There’s no question it wasn’t everyone’s cuppa, but the band were exceptional and the audience appreciative. It was decidedly more for the brain than the booty, but on a late, humid summer afternoon in the trees, it worked. There would be booty music at Avalon later.