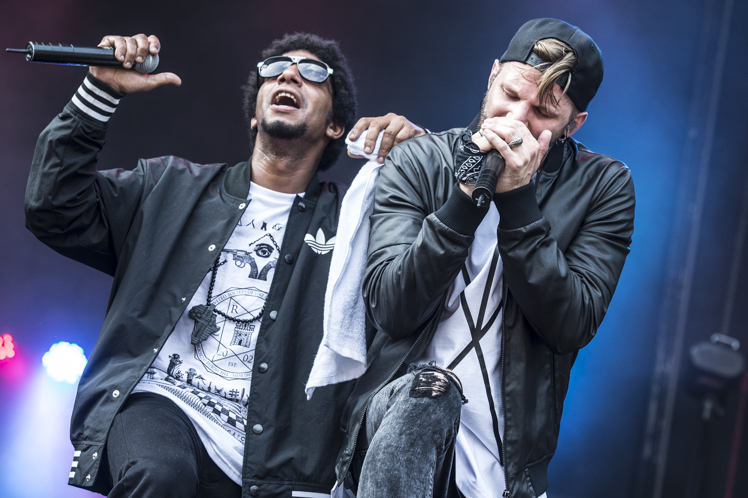 Hailing from Brighton, England, the Qemists are sort of a dubstep/drum ‘n bass version of Rage Against the Machine. They feature the same kind of rowdy spirit that seems to say: let’s rock this shit and they also hype up the idea of a revolution, though this is mostly just lip service.

The stage show features 2 MCs, a DJ, lead guitarist and a drummer, and songs tap into a Rage-like formula for guitar driven rap, only underpinned with a lot more wob wob wobs and heavy breakbeats of the UK d’n’b scene. Songs contain at least a few overtures to issues of social equality. Early on in the set, they led into the 2010 single “Your Revolution” with samples talking about one percenters. But while Rage sings from the vantage point of being members of a social collective, Qemists tends more to the first person singular. The sentiments can be a bit trite, like “You can’t change the way I feel,” or “You’ve gotta give me a reason.”

But maybe this comparison is not completely fair. The music was tight, rowdy and fun, and in a way that is the point of this band. A major purpose of their being is to create club bangers, like their closer, “Stompbox.” The party spirit was underscored by the one cover in the set, “(You Gotta) Fight for Your Right (to Party)” by the Beastie Boys, which was delivered in a credibly raucous rendition. On the whole, they are a banging loud band that brings a ton of energy and are fun to watch.

Special to this set, they debuted a new song called “Jungle,” claiming that it has never been played to any audience or broadcast on radio, TV or the Internet. They announced from the stage, “Nobody else in the world has heard this, full stop.” A mix of metallic riffs and hard wobbly breakbeats, it will do well among the d’n’b heads. But I’m pretty sure that’s just what they want. These are guys who know their niche, and exploit it to the fullest.