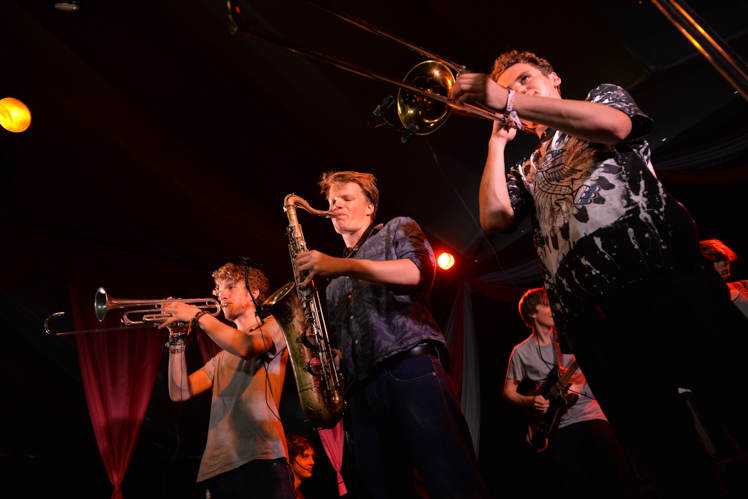 Jungle By Night’s first performance at Fuji Rock was one of many feats. First of all, fitting 9 people on Cafe de Paris’s tiny stage was an endeavor in itself, but they managed. Second, cramming all the people who wanted to see them in the venue proved to be quite a challenge, but it worked. Those who couldn’t fit inside, danced outside instead.

Even more entertaining than the music itself though, was the atmosphere JBY createdーthanks to, in part, their ability to read the crowd and figure out what they want. After a confession from one of the members that he used to watch a whole horde of different anime including Naruto, Bleach and Death Note, he asked everyone to sing along if they knew the words. The music started, revealing itself to be the theme song from the anime “Oyoge” and people danced along merrily. But the singing was a little bit on the quiet side, so the band promptly recruited an audience member (in the form of a gentleman called Sakai-san) to lead the sing-along. Well, it’s a good thing Sakai-san wasn’t getting paid for the gig because although he started well with a strong voice, his words petered out into something more like “nnngnnnennnn” as he struggled to remember the words. Thankfully the crowd happily joined in and helped the fella out.

JBY didn’t stop with just singing though, they moved onto teaching some of their special dance moves, cause that’s what they do. The band taught a move they call the “wish wish”, where you wave your arms in the air back and forth, and if you feel like it, say “wish wish” out loud as you do it. This was followed by some legwork: moving left to right, front to back, left, left, right, right… with such dizzying intensity it was a small miracle anyone was left standing at all. Which is when they announced “I get a little dizzy, but that’s okay cause you’re doing alright, right? Are you ready for some next level partying? Let’s do some jumping!”

There may have been some casualties in the name of fun amongst us level 1 party noobs. My apologies to the guy in green boots to my left. (Coordination was never my strong point.)

JBY played funky beat after funky beat, dancing and grooving like they’d gotten a special order at an Amsterdam coffee shop. Alas, all good things must come to an end, and this time it was sooner rather than later. Pieter’s last loving message to the audience before they played their last song, “Attila”, was perfect. Mixed with a dose of sadness as the show was ending, with a dash of hope as there would be one more show that night: “Oh no, this is our last song! And it hurts because you are totally awesome, thank you so much. But don’t worry because we play at 01:30am at Crystal Palace tonight!”

And that’s where you’ll find the funky lads tonight! Be there, or be really sad and funk-less elsewhere.