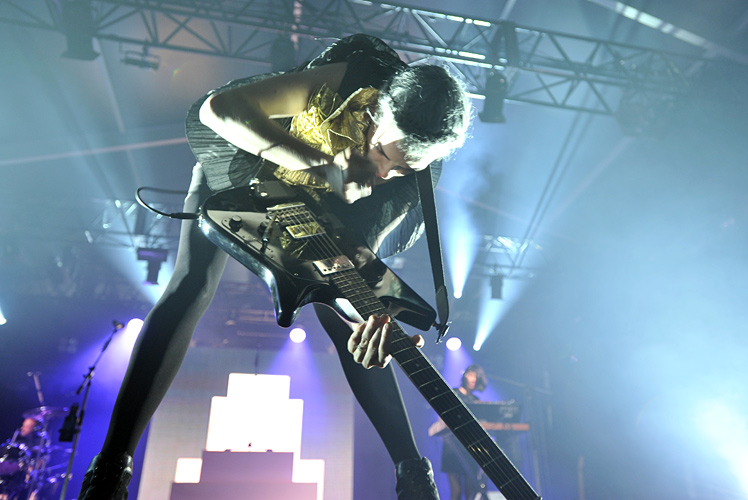 St Vincent’s Fuji Rock debut was nothing short of jaw dropping, an enthralling spectacle of voice and arty pop music that will probably not be contained by a relatively small stage like the Red Marquee the next time she comes back. It was hard to not think of Bjork — a mix of dynamic vocal technique, melodies that defy normal notions of pop catchiness, sometimes jarring beats, and an intense theatricality.

St Vincent’s real name is Annie Clark, and despite her musical pedigree — her parents are Tuck and Patti and she studied for three years at the Berklee School of Music — it seems she just as easily could have been the product of a drama department. Live, everything is staged or designed to create some intended effect, including hair, costume, the set, her immaculate, kabuki-like hand gestures and the stage movements of herself and the other performers. One hesitates to call them bandmates, as they seem more like supporting actors, especially Toko Yasuda on keyboards and bass, who in parts robot-walks in complementary movements with Clark, like they are riding treadmills in opposite directions.

When Clark finally addressed the crowd, after fairly wowing them with the raw beauty of opening songs “Rattlesnake” and “Digital Witness”, it was like she was opening a play. She began, saying, “Hello ladies and gentlemen, and a very special welcome to all the freaks and others of Japan.” She then told the crowd that when they were young, they no doubt made their own hot air balloons out of bed sheets, dreaming that this would carry them away from everything. And that they were of course intensely disappointed when this hapless plan failed to achieve its object. “But,” she continued, “the reason why you are here and I am here is because we never ever, ever gave up hope!” Then she launched into the song “Marrow,” with its chorus, “H – E – L – P / help me, help me / If you want we could go somewhere else.”

There was no other stage banter. Nothing was unscripted. On the songs “Surgeon” and “Cheerleader”, Clark rose to literally place herself atop a podium — a small, white three-tiered pyramid, like a minimalistic prop from experimental theater — and then had a sort of death scene at the end of “Prince Johnny”, withering to a prone position, then almost dripping down the podium with her body, till she was lying flat on the stage at its base. When the performance was over, Clark and the other players simply bowed in unison, with Clark staying for a second gracious bow, then they all walked off.

Yet the music was astounding, from her choppy, searing guitar licks to her austere pop tunes. It was Bjork and David Byrne and all those other influences, but it was above all unmistakably St. Vincent. One can be sure she will be back, and when she is, people will probably talk about this show, saying, “I saw St. Vincent in her prime.”