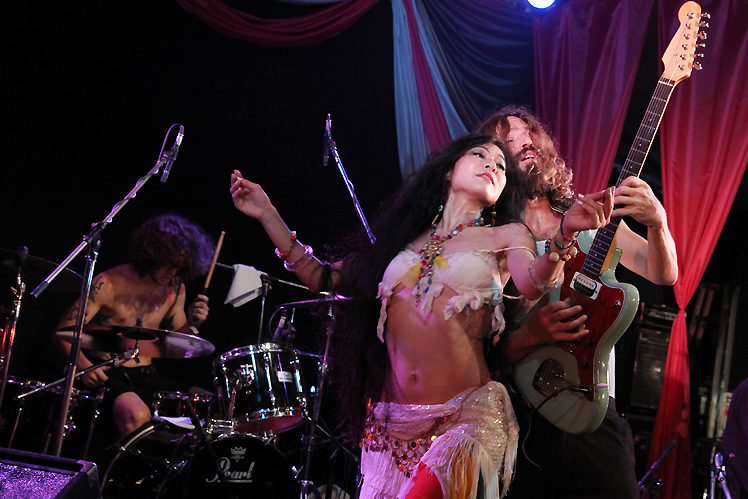 I’ve heard some unlikely combinations of genres but mediterranean surf rock is one of the best. And yet that’s exactly what Boom Pam are. The set kicks off with pure surf rock, Yuval’s tuba doubling as both trumpet and bass guitar parts with familiar guitar riffs straight from the 60′s surf rock scene. But then the tuba breaks into an ‘oompah pah ompah pah’ and the song gets flipped on its head as surf rock gets twisted into a positively Mediterranean sound, with hints of Arabic influences. There’s serpentine melody from Uri’s guitar and skirls of sound from keyboardist Danny’s fingers with both driven by Itamar’s ragged pace on the drums.

It’s not just the sound but also the visuals that capture the audience, as a belly dancer is introduced onto stage, She twines and turns ecstatically with each flick of guitar as it bucks and writhes. The melody is pinned by the tuba’s broad bass notes and drum’s clap and trap.The next time she returns, she’s almost in control of the music, each dip and sway commanding a response from the instruments. Then it’s back into pure instrumental music, with an ominous staccato start, that breaks into dancing, stamping number.

Uri plays without looking, appearing half asleep and swaying, seemingly entranced by his own song. His deep singing voice is fairly rare but it’s delivered with a hint of mystery whenever it emerges. He is definitely the focus of the band, his guitar riding the main waves of the melody. But not all fun is for the guitar, the tuba coming forward for a wonderful, mournful solo. The band finishes the set with a piece that melds traditional Hebrew style straight into the energy and directness of rock, leaving the audience to catch their breath not just from the unrelenting dancing but also from the superb music.