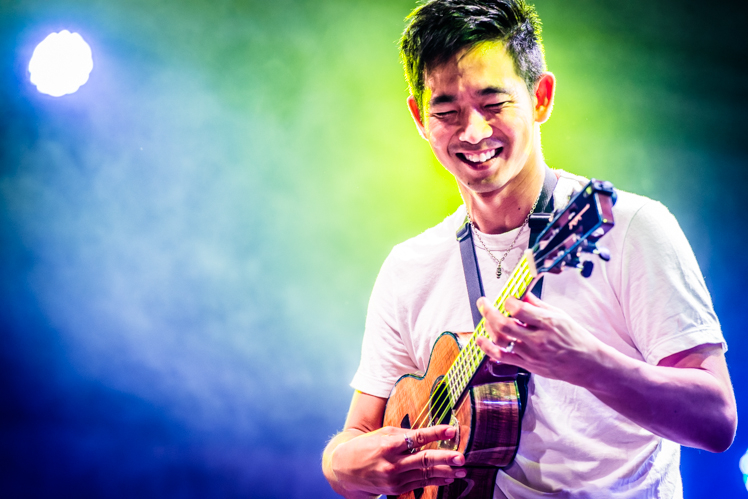 Around the World in 80 Minutes

Think the ukelele isn’t cool? Think again. Thanks to Jake Shimabukuro the versatility of the tiny stringed instrument is finally getting noticed worldwide.

Shimabukuro, a Hawaiian with Japanese heritage has been a household name in the island nation for many years thanks to collaborations like with the film “Hula Girls”, the Japanese version of “Sideways”, and more. It was here he got his first break outside of Hawaii, and he’s been coming back ever since. This year is his third time at Fuji Rock, but it’s the first time without rain. Maybe some of that Hawaiian sunshine is finally rubbing off on the fes.

The show started just after sunset, with most of the audience sitting in chairs or on the ground surrounding the Orange Court stage. Fans were vocal and lively between songs, but listened with smiles and laughter as he played a set full of songs from around the world.

“Ukelele 50”, inspired by a TV show from his home area of Hawaii helped drum up some excitement, but it was Shimabukuro’s somewhat stalled but endearing MCs in Japanese that really brought the best in the crowd. Hushed comments of how “cute” he sounded filtered after each song presentation, where he would often introduce a little bit of background behind each tune.

His original rendition of the traditional Japanese springtime song “Sakura, Sakura” was charming, and the latin-based tunes fiery. Shimabukuro’s own composition “Dragon” was rock-inspired and showed off his technical skills on the instrument. He also played The Beatles track “While My Guitar Gently Weeps” (penned by his favorite Beatle, George Harrison)—the song that ultimately led to his worldwide fame as a video of him playing it went viral on Youtube a number of years ago.

However, there was one song that made everything else pale in comparison: the man played the Queen heavyweight “Bohemian Rhapsody”. On a ukulele. Solo. All 5 minutes and 55 seconds of it. And it was amazing. Minds were blown, prejudices shattered to pieces: Jake Shimabukuro will forever be known as the man who made ukuleles cool.