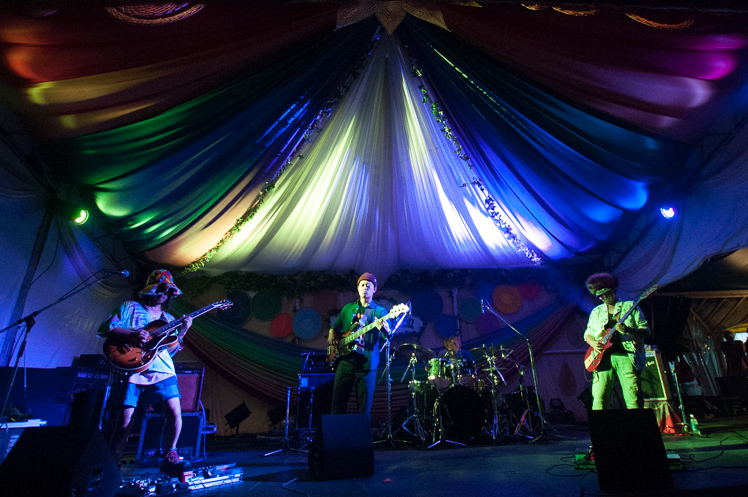 Jam bands. They’re a divisive thing. If you like ‘em, you love ‘em; if you don’t, you hate ‘em. There’s room in the middle, though. Not every jam band is a third-rate String Cheese Incident knock-off. Muff, the Japanese jam band who hit the Gypsy Avalon stage at dinner time, is not one of those knock-off bands. Sure, they pulled out most of the usual props – wah-wah guitars, funk bass, and, um, jams – but they were such virtuoso players, with enough interest in new sounds, that it rose above the usual.

It was dubious at first – a nondescript drummer, a bassist who looked straight out of your buddy’s Dead cover band, and two guitarists who were dressed up like it was kind of a joke – especially the guitarist with the multi-coloured afro wig and headband. Not promising. Yet despite the look, and the fact that they didn’t move a whole bunch, they proved to be better than first impressions would suggest.

The members of Muff are all super musicians. A song may have started with the usual wah-wah, but shortly the guitarists were finding new pedal sounds and unusual rhythms to lay atop the usual jam sounds. Sure, they went into a funk jam – more than once – but the bass player’s skills were monstrous, and it was heavy, serious funk. Occasionally they veered off into more standard rock jams, but they seemed fond of funk, and continued to revert to it. They also moved into harder, more standard ‘classic rock’ sounds too. They were the kind of jam band who might possibly win over those who don’t care for the genre, simply because they themselves weren’t content with the genre’s current status quo.