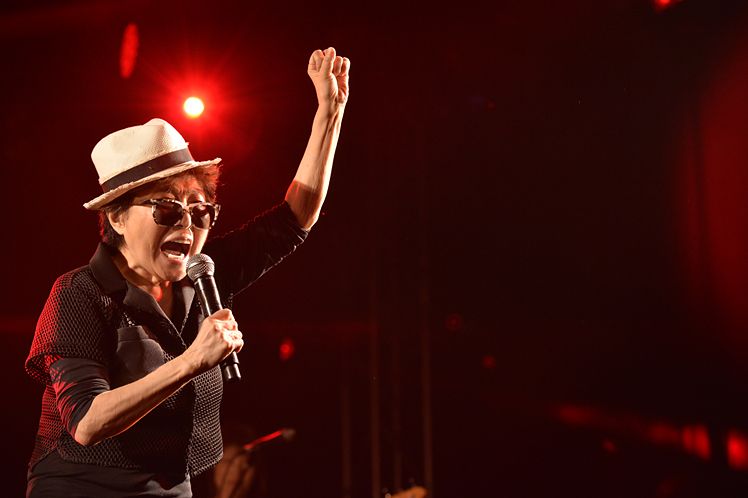 So what do you want to know? If it was car-crash entertainment? If it was the worst show ever, as some wags described Yoko’s Glastonbury performance?

No. It was amazing. Yoko Ono is an 81-year-od lady who should be sitting in a nursing home mumbling gibberish and smelling of wee, but instead is headlining a big stage, with Cornelius and members of Wilco, Buffalo Daughter and Cibo Matto. You’ll never do anything half as cool at half this age.

People who turned up early got to watch the band perform alone in what was half-soundcheck, half-jam, and it was obvious this was going to be great.

When the show proper begins, Yoko Ono comes on wearing jeans, a black shirt, shades and a straw hat, looking cooler than most of the musicians I’ve seen today. Everyone else is wearing T-shirts with the slogan “War is over!”, which suggests they haven’t been following the news lately.

Yoko makes a peace sign and says “Hi! I’m so glad I’m here today, and I’m so glad you’re here today.” Well, she seems friendly, but she also broke up The Beatles, so it’s too early to judge this one.

And the sight of an octogenarian Japanese lady addressing her home crowd in English is just the start of the wonderful weirdness.

“We have to make sure this country survives. We have to imagine peace,” she says, but doesn’t elaborate on the threat to Japan or its route to survival. Instead, the strobe lights kick in and she starts screaming. The band come in with some full throttle rock music that only musicians of this caliber could pull off.

Then it stops, and the world’s most famous widow begins to read what I think is some kind of Japanese poetry. Hey, she’s always been an avant-garde artist, so this kind of battiness is her bread and butter. We knew what we signed up for when we came to see her. The music’s building as her poem goes on, there’s taiko, and guitars making a wall of sound. She’s not really reading anymore. It’s a kind of wailing.

And then it ends. And they start playing “Walking on Thin Ice”. It’s one of the best tracks Yoko has ever been involved with, but it’s also the track she was working on with John the day he was shot. It must take so much strength to sing that song. But if anyone in the world has incredible strength it’s this lady. And Mariusz Pudzianowski.

Yoko can’t really sing. It’s all out of tune. But that didn’t hold the Stone Roses back, and it’s not holding her back. She’s doing what she wants, and having more fun than most people on this planet.

“Why is life so beautiful?” she asks the audience. “Why is the world so interesting?”

Well, clearly one thing that makes the world interesting is that a really old lady who’s never had a big hit can ask people like Cornelius and Nels Cline to play while she reads poetry or screams out of tune, and they’ll agree to help.

“Let’s keep smiling,” she says. And lots of people seem to be doing as she asks.

The next track is “Open Your Box”. It was banned in the US in the ’70s because it means spread your legs, and it’s not polite to talk about sex so openly. You’re supposed to sing things like “Shake your moneymaker”. The official lyrics to this song include the lines “Open your box, Open your trousers, Open your thighs, Open your legs, Open your flies, Open your ears, Open your nose.” Well, she’s puzzled me with those last two lines. Do people do that? Regardless, she’s zooming in on the word “open” and shouting it over and over again. I’m not sure that shouting “OPEN” like this would ever convince someone to have sex. It sounds a bit creepy and demanding. Meanwhile, the music is amazing. They’re all on drums now, doing the kind of call-and-response routine you hear in taiko performances.

Next up is “Unun To”. I think she’s singing about overcoming painful memories and coming out positive. If anyone knows how to do that, she does.

Oh, here comes “Don’t Worry Kyoko (Mummy’s Only Looking for Her Hand in the Snow)”. This is the song that prompted so much mockery at Glastonbury. What better way to show you don’t give a shit than to play it again. It seems a lot shorter than it was in England, but that may be an illusion.

The song’s about trying to get in touch with her estranged daughter. It took her 20 years. She tells us that it just goes to show that you can achieve anything if you try — even if it takes 20 years. There’s really nobody at Fuji Rock this year with so many positive messages.

She wraps up with “Remember Love”, a ballad she recorded during the bed-in. It’s a very low-key way to conclude the set. And with an “It was very nice to meet you today. Thank you so much for coming,” she’s off.

But the lights stay down, and we’re 10 minutes short of the scheduled performance time, so we know there’s going to be an encore. The band come back, and Yoko Ono whips out a sword and cuts the head off every single musician before screaming “I was only joking about that peace and love bullshit, motherfuckers”.

No, that’s not true. What actually happened is that they played another song. And I forgave her for breaking up the Beatles.