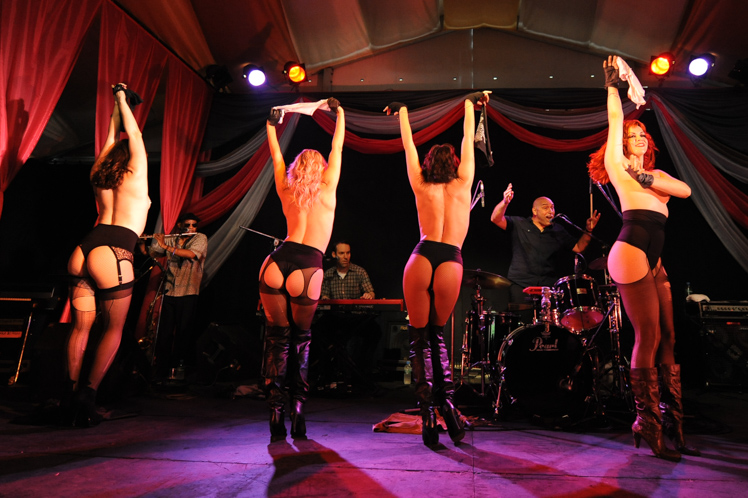 Who said burlesque shows should be nighttime only? Not Big Willie, and definitely not the packed crowd at the Cafe de Paris tent. A Fuji Rock classic by now, Big Willie’s Burlesque Fuji Revue made its traditional appearance at Cafe de Paris on Saturday afternoon with his band and team of dancers, amping up the muggy heat with some sultry numbers.

As Big Willie took to the drum set and started jamming with his band, the four scantily clad dancers jumped on stage, ooh-ing and ah-ing the goggle-eyed crowd. While the band played songs like “Black Dog” by Led Zeppelin and “I Put a Spell on You” by the Screamin’ Jay Hawkins, the dancers lost one skimpy cloth at a time, teasing both the crowd and the band. The flautist in the band really added some class to the sweaty tent, playing a sexy solo behind one of the girls’ own dance.

Big Willie proved that his show is a true Fuji Rock staple by packing in a full house at the Cafe de Paris, and it looks like he won’t be gone anytime soon.