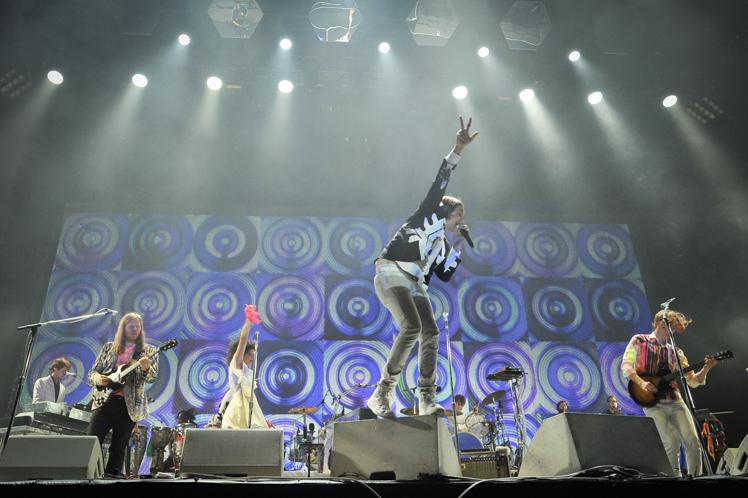 The very fact Arcade Fire have, in ten years, managed to become an act capable of headlining the Green Stage at Fuji Rock (and many other festivals around the globe) is pretty nutty. This is a pack of arty types who opened their Saturday-night spotlight set by having a guy decked out in silver…potentially tin foil…introduce them in garbled speech before the band themselves ripped into a dance song doubling as a commentary on the Internet. From there, they sang about suburbs, zigged into Caribbean sounds and eventually brought out giant-headed dancers to groove around on stage while Yellow Magic Orchestra’s “Rydeen” blared. This is a band playing to hundreds of thousands around the world.

Arcade Fire, though, reminded that the real reason they’ve become a festival draw is less the high-concept antics and more because of how shout-ready their songs are. The Montreal-based group – featuring the six official members and a handful of guest musicians including…hey, was that Owen Pallet? – had the field in front of them singing the words to the shuffling “The Suburbs,” and just had them plain shouting throughout most of their songs. On the theatric “Neighborhood #1 (Tunnels), the opening track on the breakthrough album that came out a decade ago that started the push towards where they are now, nearly every person on stage engaged in wordless hollering. As did the audience, who kept it up even after the song finished.

Balancing out the anthemic moments were the outfit’s recent shift towards more dance-leaning material. Arcade Fire have always kept one eye on the floor since their debut, but they edged even closer on last year’s Reflektor, which featured James Murphy (formerly of LCD Soundsystem) handling production. They opened the night with the title track from that album, a horn-assisted shuffle featuring squelchy acid-house electronics, and later copped a Michael-Jackson strut for “We Exist.” These songs didn’t prompt as much outright celebration as they did easy-going shuffling from the crowd…save for the wide-eyed sounds of “Sprawl II (Mountains Beyond Mountains),” sung by Régine Chassagne and one of Arcade Fire’s best songs.

Still, they are a group who excel when they aim for shout-along moments, lead singer Win Butler using his personal brand of brooding charisma to rev up punters. The mournful hop of “The Suburbs” served as a way for fans to start getting into the singing mood, before ripping into the tumbling “Ready To Start,” which had a large chunk of the audience screaming and hopping around. Soon after was the group’s finest moment, “No Cars Go,” an urgent number bordering on sea shanty that riled the crowd up even more. It was these instances that made the eye-brow raising stuff easier to digest, and made it clear why these guys have turned into a globally sought-after festival headliner.