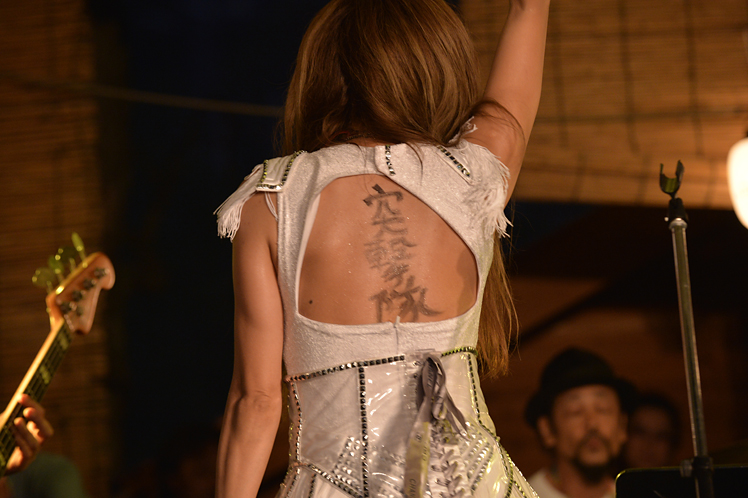 The Naeba Ongaku Totsugekitai takes place on the tiny Naeba Shokudo stage every night during the festival. It’s always the first act to kick off the stage each night. Roughly translated Naeba Ongaku Totsugekitai means the Naeba music troopers or fighters or something like that. On this stage, which can barely hold 6-7 people and can only be seen by 50 people or so we are treated to special guests of some significance in Japanese rock history. It may be a famous singer, guitarist or instrumentalist and part of the fun is not knowing who will show up. There are roughly 4 or 5 guests per session and the whole thing only lasts about 40 minutes or so. You may see an act performing the next day or you may get one not scheduled at the festival this year at all.

On the Saturday our first guest was Keicot from DeeDeeFever. The always energetic Keicot sang her lungs out and whipped her arms wildly, it was a feat she didn’t knock anything down on the small stage. She sang two songs closing with a cheery sing-a-long version of ‘Cant take my eyes of you’. Next up was Hamazaki Takashi of Flying Kids fame. He closed with the Japanese version of ‘Daydream believer’ which again got the crowd singing and clapping along. We also had the lead singer from the Japanese band dip, Yamaji Kazuhide he continued to incite more chanting with his grungy version of ‘Like a rolling stone’

Finally, Haneda Hiroyuki of the famed band The Roosters came out and along with everyone sang a couple classic blues songs in English. All the while the back part of the stage was full of more famous Japanese rock stars, I recognized a face or two from the band Route 17 Rock’n’Roll orchestra. It was quick and frenzied but very memorable it made me want to brush up on my Japanese rock history. Even in the short confines of the 40 minute set they were some of the most talented musicians I heard all weekend.