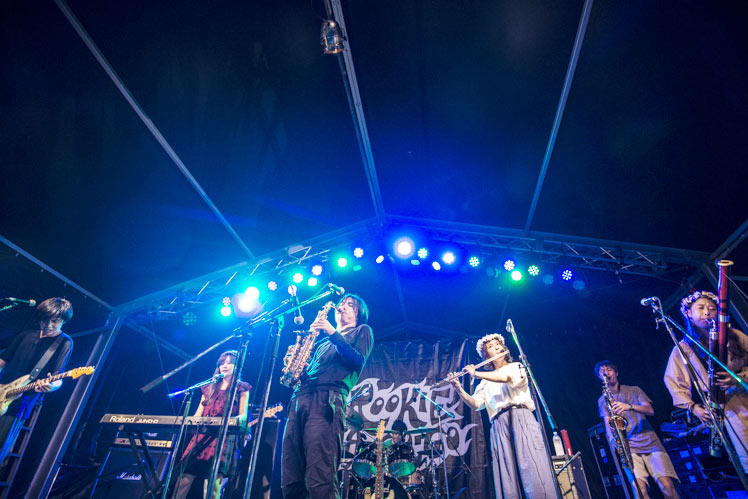 It’s a bit of cram on stage for all eight members, with three woodwind players and a keyboardist adding to the normal rock band combination of instruments. The female chorus line starts off brightly as sharp, brief guitars play in between warm columns of flute and bassoon. A call and response between the main singer and female chorus line starts, before the instruments plunge back in to bind all the members together in a jazzy pop anthem. This breaks for flying flute and choppy guitar to pursue each other as the vocals are temporarily abandoned for a wonderful instrumental jam. Pop lyrics return to hover over this sound, the tight groove from interlocking guitars the backbone of the piece while warm woodwind softens the hard edges of the burbling guitar line and pacy drums. This explodes up into a heavenly female chorus for the end.

The third song sees the band leader and lead singer pick up a sax to add to the mix, proving his skill with a blistering solo. The guitar is pushed to the side as the woodwind solo against one another but it returns with a vengeance, unleashing a racing chord progression with the male singer’s quick-spoken lyrics. The last song starts quietly, stripped to guitar and intertwined male and female voices. The rest of the band bursts to life around the pair’s joyful singing. Taking this as a last chance to show off their instrumental prowess, the band treats the crowd to a brazen sax solo and a wailing guitar solo, wringing every last drop of anguish from their instruments.

The group’s sound combines the inventiveness and playfulness of jazz with pop’s eye for melody and shape. For any band, the songwriting on display here is top notch and I can’t help but be impressed that some fans have travelled to Naeba without a ticket just to support this band. I can definitely see why they inspire this support and can also see it increasing in the future, judging by the huge gathering they managed to attract by the end of their set.