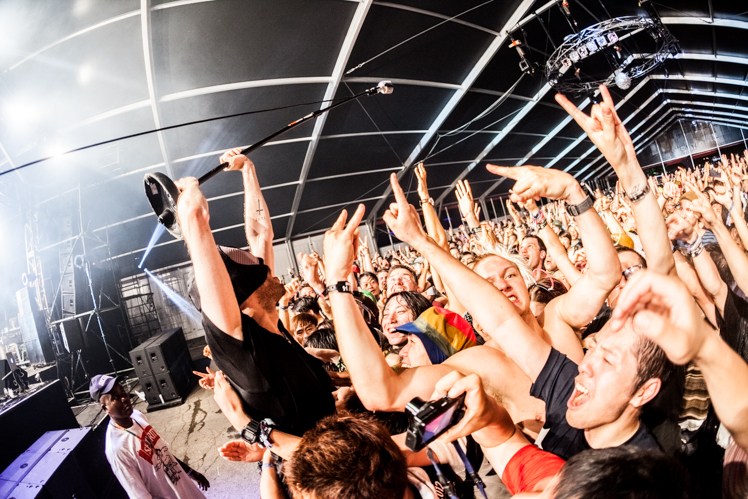 You knew they were going to play the famous Steve Aoki song, “Warp 1.9”, a dance club banger from 2009. They opened with that. And of course everyone went crazy. There were bankers dressed as drag queens, and cute little girls in flip flops moshing, and all sorts of unusual ecstatic phenomena. But you didn’t know they could keep the entire Red Marquee back to the sound booth — around 2000 people — jumping for the entire 75 minutes of the set. And you didn’t know they would have a grand piano on stage. And play rock ‘n roll boogie woogie on guitar, bass and drums. And death metal.

There is no question in my mind the Bloody Beetroots delivered the most energetic, frenetic, and to say it the normal way — bangin — set of Fuji Rock 2014. This was fuckin bangin! And it never stopped. Not at least until it was really finally over. DJ Cyril Hahn, who came next, merely DJing, had an impossible act to follow. I was sweating out every pore and too tired to feel sorry for him.

The Bloody Beetroots are an Italian group known for their hard electro, which they do as both a DJ set and a live set. They also always perform wearing black Spider Man masks (i.e. Venom masks, the evil Spider Man). At first these were the cheap store-bought variety. Now they are custom made and feature flashing LED eyes.

Despite the fact that they are known for club bangers, which in a way is a lowest common denominator class of dance music, they have musical chops and the live set is their chance to show it. Ever since their first album, Ramborama, one could suspect classical music training. Though the mood of driving club electro is everywhere on that record, several compositions are too complex to play to crowds of drugged out Europeans.

Live, they cultivate the musicality even further, but without sacrificing the clubby highs. The group’s founder and bandleader, Bob Cornelius Rifo (piano/effects, guitars, vocals), as joined by Battle (synthesizers, bass guitar) and a drummer. After 15 minutes of synth, piano and DJing loud crowd pumping hits, they left the electronics for guitar and bass, launching into a rock ‘n roll boogie woogie that had the crowd moshing all the same. Then more electro. And ten minutes later they were playing full-on instrumental death metal. All told, Rifo and Battles were almost constantly on instruments, switching frequently. But through all the changes, they still managed an “epic drop” about every three or four minutes. There was no doubt a lot of push-button music as well, but nobody seemed to care. We were all too busy losing our minds.