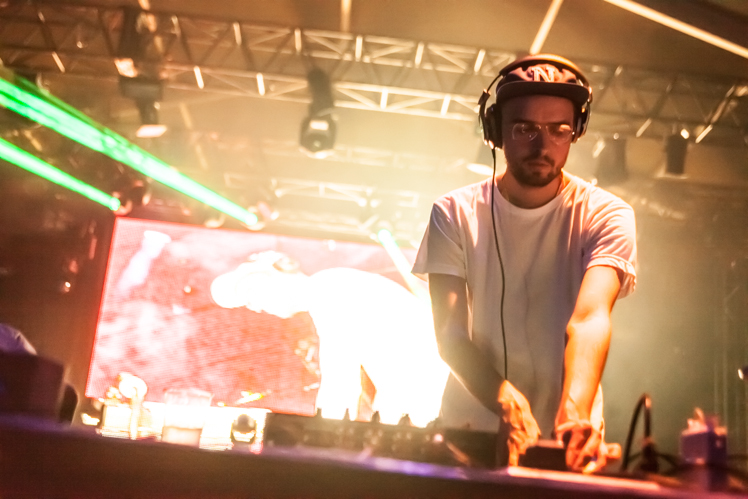 Swiss DJ Cyril Hahn had the unenviable task of following the Bloody Beetroots, who had just played hardest banging electronic set of Fuji Rock 2014. His style is also completely opposed. Hahn is known for taking pop club anthems, the standard fare of high octane dance music played in virtually every club in the world like Destiny’s Child or Mariah Carey, and grinding down the tempo to transform them into a sedated variety of deep house.

The Bloody Beetroots by comparison had just had 2000+ people jumping for 75 minutes straight (see a review of the Blood Beetroots). Hahn didn’t even try to follow that. It was not his vibe. Going on at 2:15am on Saturday night, he opened with a slowly building ambient track, eventually bringing in the hard four-four bass thumps. He knew he had to build his own audience — the Bloody Beetroots crowd had sweated itself to exhaustion and was jetting through the exits — so it was a good ten minutes before he was up to speed.

What followed was a selection of Hahn’s personally crafted house tracks (he has a penchant for sliding electric handclaps into the beat). But by that point it was like trying to sell Valium to meth heads. His music was also a drug, it was just not the one they were already hooked on.