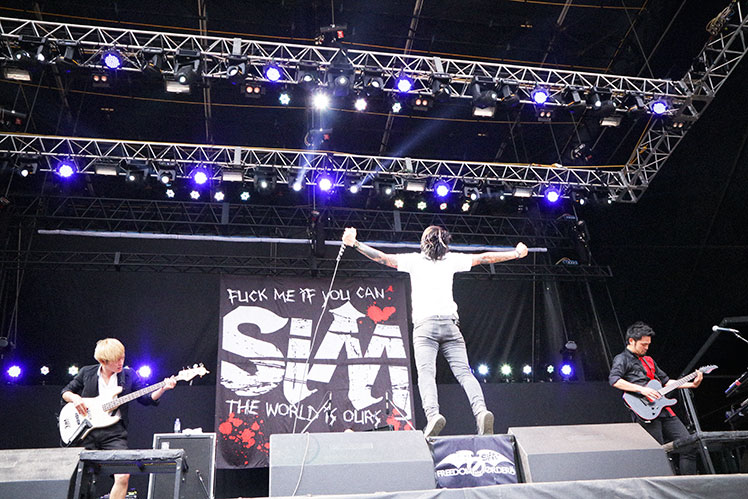 It’s been three years since SiM’s Fuji Rock-but-not-quite Fuji Rock debut at the Rookie A Go-Go stage. With 7 years under their belts as a band they certainly couldn’t have been called spring chickens back then, but this year, on their 10th anniversary, they finally played Fuji Rock for real.

SiM started with “Get Up, Get Up”: a signal for head banging and hair flicking to commence. Mah (vocals), Sin (bass) and Show-Hate (guitar) made full use of the big stage given to them—they were running from side-to-side, climbing and dancing on amps and just generally being difficult to keep track of. Godri did a staunch job on drums, gaining admiration from newfound fans that stopped to watch by chance and stayed for the whole show.

And what a show it was. A constant flow of crowd surfers steadily made its way to the front of the stage, full bottles of Pocari Sweat were flung into the air, and there was general chaos as the performance went from strength to strength. One highlight was the huge circle pit kicking up dust around the lighting technician tent in the middle of the grounds for “Faster than the Clock”.

Although SiM’s reggae-punk fusion is pretty heavy, and they may seem wild, MAh took some time to talk about their journey, that started just like any other person’s: “When I was in high school, I said ‘One day I’ll play at Fuji Rock Festival!’, and people probably through I was crazy. It’s gone ten years, but look at us now. It’s not just us, lots of people and bands’ dreams have come true this weekend. Yours will too, just believe in it.”

With that in mind, the band slipped into a slow track, “Rum”, a lolling, swaying tune that the audience probably needed at that point. The heat from the sun wasn’t letting up, and the dust was still flying from all the two-stepping and circle pits.

And with the change in tone, also a change in language. Suddenly Mah switched to English and asked everyone to crouch down in the dust. The audience willingly obliged, the majority knowing what would come next: a count of one, two, three and everyone jumped up into the air and two-stepped their way through “KiLLiNG ME”, a not-so subtle ode to cannabis.

For their final song, SiM chose their heaviest for the day: “f.a.i.t.h”—a screamo fest that opened with an epic Wall of Death. Fans and band alike went all out until the very last note was played and were most likely completely wrecked for the rest of the day.

SiM tours regularly in Japan and will venture over to Taiwan later this summer. If you have the chance to see them live, do it. Their recorded music is great, but it’s their live shows that are jaw drop worthy. Go see themーyou won’t regret it.