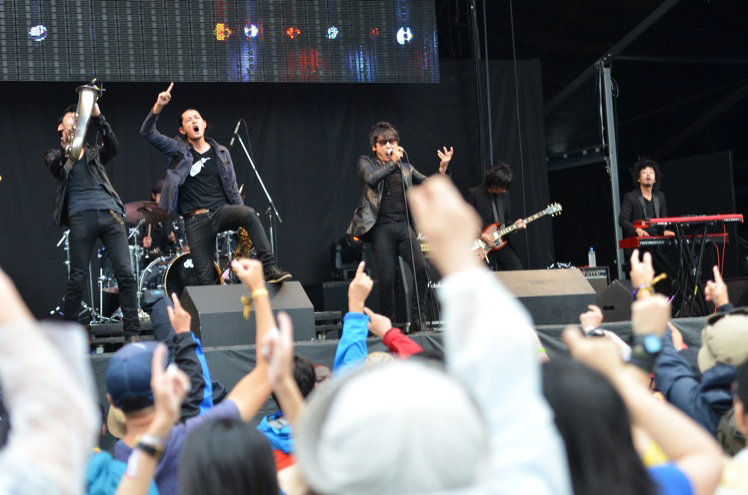 It’s probably tough for Japanese ska bands – at least those of the traditional, Studio One, big-band variety – to step out the shadow of the Tokyo Ska Paradise Orchestra. Throughout their set, “agitate man” Cold Muta Ryuno did his best to lead The Man out of that shadow by passing through it – in other words, acknowledging it by playing a similar upbeat big-band style of ska with the kind of energy and precision for which the TSPO are known.

Ryuno doesn’t sing so much as he vocalizes in that traditional ska manner, accenting off-beats with non-verbal sounds. When he was verbal, he managed to reference both Madness’ ‘monster sound’ and ‘sound one’ in the same sentence. This fella clearly wants you understand his ska pedigree.

Amateurs need not apply to a group like this, and every member was exceptional – especially trumpet player Ikawa Ken, blowing one-handed in angular poses for full visual effect. The Man brought out all the ska tricks, including wise choices of cover songs (James Bond Theme ska? Miserlou ska?). They toned it down in the middle for a dubby mid-tempo track, before raising the roof with a heavier guitar sound as the set came to a close. That brought the energy to a peak, but it wasn’t their strongest suit. Their strongest suit was simply sticking to the playbook, doing what’s already been done better than most can do it.